3 Years of Bootstrapping - Half a Million Dollars A Year Later - and 30x500, Redux

I meant to do one of these retrospective posts in January, but you know what? Tax season seems like as good a time as any.

In case you don’t know the story of my business, here’s the short version: in 2008, I married my rockstar JavaScripter husband Thomas, and moved to Austria. That summer, before our wedding, we built some fun projects together which attracted interest from big name Fortune 50 clients who wanted a piece of the action.

There was just one problem: despite fun projects and checks in the mid-five-figs, I was sick of being deployed as a tool for other people’s economic gain.

So I persuaded my man to help me build a subscription software app. (He was pretty skeptical at the time!) Thus was our joint consulting-and-product biz born:

In 2008, we had $0 revenue from products. We built Noko over the second half and launched in December. We launched our first ebook in January. 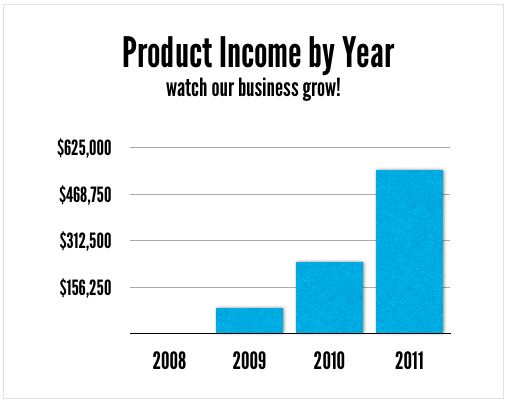 I’m still kinda shocked by my reaction to these numbers.

On the one hand, meh. I’ve adjusted to these numbers. I made a lot of mistakes. We didn’t meet my goal for 2011. Boohoo. (Yes, really, that’s exactly what I thought when I read that P&L; sheet. (I know how obnoxious that makes me sound…and I’m okay with it. Honesty on the internet!))

On the other hand, holy crap!! I grew up going to school with holes in my clothes, with the power and phone turned off on a semi-annual basis. “We can’t afford” is the phrase that most comes to mind. And 7 years ago, almost to the day, I accepted a job offer for $55k/year with NO benefits and thought that was pretty great.

Sooo, when it sinks in, more than half a million dollars a year…wow. We spent more on developers & other outsourcing in 2011 than I ever made as an employee. (Nearly $200k on this alone! I spent over $200,000 last year!!) Staggering.

Not only is only entirely possible to hold both these reactions in a single head at the same time, it’s hard not to.

This applies just as much to business as life as a whole. (Thanks, Walt!) Which is just one of the many, many startling and redonkulous things I’ve learned on my Epic Product Journey.

All this hedonic adaptation doesn’t mean that my life isn’t awesome. It pretty much is. It just means I (and you!) have room to Learn & Grow. Lots and lots of it.

Business is a microcosm of life as a whole, with all the good parts and bad parts.

Starting and running a product business, especially, is a crash course in personal development

Which is why I’m sooo delighted to have field alumni from my 30x500 Product Launch Class who are just beginning their Epic Product Journey in earnest:

And there are so many more who are on the verge: Dimitri with PhotoCouch , Brook with ReadySetRails, Noah with Rebuilding Rails, Thibaut Barrere with WiseCash, Sarah with Faster Founder (no link yet), Brett Bibby with his Polygon Reduction Plugin, Phil DeJarnett with Pinup.

The list above are just a handful of folks who are top of mind for me at this moment, when I wrote this blog post. There are more who deserve to be here, who I’ll probably add when they tweet me “hey, why not me?” ;)

And there are ever more who haven’t yet finished the course, returning alumni who write me things like:

The lessons and nuggets that I picked up from the first few lessons have made quite a difference in our consulting work already, and have made this class more than worth the money we’ve spent on it.

It’s been worth every penny, even though I haven’t yet launched.  Best decision I’ve made in a while and a “path to freedom” for when the day job gets me down.

We’re doing some interesting things in class: defining success, taking time to consider failure, realizing what we’re doing, being honest with ourselves.  This has floored me about every other day.  It’s a dialog with myself and with you guys that can get to the core of things quickly.  That’s how it should be.

All this right here? Better than any pay day. By an order of magnitude!

I Love Money…But Love Being a Human Lever Even More

Let’s be honest: I love me some money. I like nice things, and I love knowing that I don’t have to think about it. I love that I can feel comfortable giving 10%+ of my personal income to charities I believe in, and that I can afford to work with awesome people. I love knowing that, fates forfend, if I’m incapacitated by illness for 3 months (again), I can relax and recuperate knowing I cannot be fired and that my business (and income) will just keep on truckin’.

There’s also the touchy feely side:

I love getting emails from Noko customers telling me how much more money Noko helps them earn, how it helps them be less neurotic about their time & work and enjoy their lives more. I love getting to chat directly with people who use what I make instead of committees and clients who obscure the relationship between my work and their end user.

But what I really, really love is this:

Watching my students kick ass in the 30×500 Product Launch Class Watching them learn what I’ve learned, and experience the joy of working directly with the people whose lives they touch. Disintermediating away clients, committees, and bosses, and getting straight to the quick. Watching them feel, for the first time, the joy of realizing they can choose how much they want to earn.

And watching them get letters from their customers as they help them kick ass.

Then seeing them give the same great advice and encouragement — sometimes even better! — to their fellow alumni.

So while my accounting paperwork this year reports that I indeed started a business which brought in nearly $550,000… I know that, every year, I’m helping my students launch businesses which, in toto, will multiply that by ten over the next few years.

Some day, if there are enough of us, we will move the world. Even if we only move the world a little bit, for a hundred people here, a thousand people there, we’re still moving the world. Which amazes me anew every single day.

30×500 is a pretty decent money maker for me, but it’s not as profitable as if I’d pour that time and effort into growing Noko and Charm. On the other hand, it has a much bigger impact on a smaller group of people (my awesome, awesome students). And that’s what I love.

Which is why I don’t try to maximize my personal 30×500 ROI, but rather my student’s ROI:

When you join 30×500, you join for life. Shit happens. Sometimes you can’t finish the class you’re in “on time.” I know it. As an alumnus, you can retake the class any time you want or need.

You also get a lifetime subscription to all the updated, improved and expanded lessons. (And I don’t rest on my laurels; I’m always trying to make 30×500 better, more effective, for you. I’m not perfect, but I’m always trying.)

You’re also invited to the weekly Office Hours chats, as long as I hold them. (Which over 2 years have grown from sporadic now and then, to twice a month, to once weekly. And I foresee doing this for a long time.)

Perhaps best of all, you have access to the alumni mailing list — an awesome, involved group of motivated people, like yourself, who are there for you, to answer your questions, poke holes in your mistakes, point out things you’ve overlooked, and generally help you kick your own ass. Who are there, sharing their successes and trials, to inspire you and show you that you’re so very far from alone.

The quality of this alumni group cannot be overstated:

Right now, some 30×500 alumni are organizing a study group for those who are “behind” the official class schedule. This is amazing to me. And brilliant.

And every week (or more!) we get emails like this one from Brennan:

I just pushed a few updates based on the awesome feedback I’ve received. (Once again, this class has paid for itself and then some!)

[Later]…I pushed [changes based on your feedback] last night, and am already now getting 8% conversion rates (instead of < 2%).

I have pages and pages of quotes and comments like this.

Together, we’re building a bootstrap army, inspiration delivery network, and support group all in one. And it kicks ass.

Funmail Guarantee: Obv there’s no obligation whatsoever. You can unsubscribe at any time. And I promise to send you nothing but information on the class, free goodies, stories, samples and discounts and awesome stuff like that!