How to overcome the fear of putting yourself out there

It’s a cruel, cruel joke of the universe that among the most common fears that so many creators share, is the act of sharing itself.

“I hate putting myself out in public.”

“The idea of building an audience gives me the willies.”

“What could I have to offer that hasn’t already been said?”

“I don’t want to do or say something wrong!”

This mental chaos monkey of fear shows up in lots of ways:

Yours might feel different from these, but if it’s ever stood in your way, you know exactly what I’m talking about.

Where does this fear come from?

Nearly 100% of the time any of our students or readers is hesitating to take action, a very specific pair of words inevitably show up:

Now, I’m not here to tell you that your feelings aren’t real - you are 100% in the clear to feel however you feel.

But your feelings are just that. Feelings.

When there’s actual danger present, your feelings are typically there to keep you safe and protected. And thank goodness for ‘em.

But what about when you’re not in danger, yet you feel feelings of fear? What in the chaos monkey is up with your feelings, then?

Your exact same feelings of fear, panic, and anxiety can show up without any actual danger. Sometimes even with the same intensity!

All it takes is an unfamiliar experience.

That unfamiliar experience makes your pattern-matching brain basically zero out, shout “I don’t know!” and dump a bunch of chemicals that make your heart race and your armpits sweat.

But it doesn’t stop there. It gets even worse when our imagination kicks in and starts inventing reasons for our body to be reacting negatively.

Your imagination perks up and says: “Wow, we typically don’t feel this terrible unless something is really bad. I wonder what could be bad? Let me count the ways…“

…and now you’re in a spiral where sometimes, the intense negative feelings end up lasting MUCH longer than the initial moment of uncertainty.

Brains, I tell ya. Jerks.

Naturally, all of this is happening within split seconds. And for most of us, it happens out of our conscious band of understanding. Fast, and invisible.

It takes real practice to start noticing the difference between when something presents an actual danger or risk, and when it’s just your feelings doing their swirly anxiety dance.

Quick note: If you have access to it, therapy can be a very big help with this kind of work. But even without a professional, you can learn to notice this pattern in your behavior and replace it with something more productive.

How to hijack your brain and get your feelings under control

When you start putting yourself out there, one of the most common sources of anxiety stems from a feeling of “all eyes are on me, I better not fuck this up!”

That’s how it feels, anyway.

The thing to remember about putting yourself out there is that the MOST LIKELY outcome is…nothing.

But the most likely thing is that NOTHING happens.

And therein lies the opportunity.

If you calibrate yourself to expect nothing (instead of the worst), you can then allow yourself to be pleasantly surprised when a stranger on the internet thanks you for your comment, or shares your link, or recommends your work.

If you calibrate yourself to appreciate feedback but do the work even if you don’t get any, you can show up to do the work now matter how it “feels.”

And doing the work more than 15-20 times is when the good feelings start to show up, because that’s when you start to build a bit of confidence. You learn what works and what doesn’t, and each time you show up, you improve a bit.

You might be surprised that even after hundreds of launches, I still feel pangs of anxiousness right before it’s go time.

I know - from the evidence of my own lived experience - that there are lots of people who can benefit from my work and plenty of people who will appreciate it. I know that no past launch has ever created actual harm to me or to others. I know that I can handle a random jerk sending a snarky or rude message, and move on with my day.

But I also know that that the feelings are just feelings, a chemical reaction in my body, and that uncertainty is perfectly normal and safe.

Confidence isn't something you start with when you sit down to do something new.

Confidence is the result of doing something enough times to shift from feeling uncertain, to feeling like you know at least kinda what to expect (even without certainty).

So what actually happens?

Everything we teach in 30x500 challenges you to examine the evidence that’s present, and sometimes, right in front of you.

The hard facts. What’s actually happening right on the page or in the room. What people are saying and doing, not what you think they would say or do.

So lets examine the evidence around putting yourself out there:

Yes, you might lose time writing that article or tweet, or creating that video. And losing time doesn’t feel good, but how many hours have you “lost” (or wasted) refreshing Hacker News, watching your favorite TV series for the 11th time, or doomscrolling on Twitter?

Yes, someone might saying something mean on the Internet, but why does their opinion matter? If their criticism is valid (though you don’t have to assume that it is), you can use their critique to make your work better.

Try to “Self Safari”

So when you notice yourself starting to feel a certain way (fear, anxious, worry), try doing a little bit of “situational” Self-Safari.

What’s the actual cause of the pain you’re feeling? Is it worry about something that might happen, or has happened in the past, or is something truly happening right now?

If the answer is “oh, it’s just my feelings” then ask yourself what you stand to lose for NOT taking action in spite of your feelings?

If you start using this line of self-inquiry, you’ll likely start to notice that the answer is almost never going to be “oh shit something bad is actually happening here” unless you’re fundamentally a TERRIBLE person doing terrible things.

Four more inoculations for putting ourselves out there

We want to look and sound good, which too often means that we overvalue new and novel ideas compared to tried and true. It also means we assume that if it’s been done before, and we’re going to be laughed out of the room for being unoriginal.

When YOU know something, when it’s OBVIOUS to you, and when you’ve seen it talked about over and over and over, everyone who isn’t a total idiot must already know it too, right?

Except there is no evidence for this, and TONS of evidence to the contrary!

New newbies are minted every day

New people enter the field every day. Many of those people are likely hearing things for the first time, and their first time could be from you!

Lots of resources may exist, but don’t assume they are effective

Lots of people are pretty ineffective at communicating what they know. Even if they technically know more, or are more experienced, the way they communicate can turn readers off (or makes them feel dumb for not knowing) which makes room for you to do a better, more compassionate job at making the reader feel understood.

Your POV is unique enough

You will always have YOUR point of view and lived experience! Is it 100% perfectly unique in the whole world? Maybe, maybe not. But the odds of that point of view being identical to someone else with the same knowledge in the same moment and being in front of the same person are vanishingly low.

Also…why do we overvalue being “unique” and original anyway? If the recipient needs it, and you provide it, do they care that someone else out there has done or said the same thing?

Now ask yourself this: how many people do you think are living with problems of all kinds, big and small, that feel like nobody out there understands them or is even trying to help them?

Through this lens, it starts to become clear that NOT putting yourself out there is actually the worst choice of all.

Not just for you, but for anyone who you might be able to help.

Still stuck in your head?

When all else fails - when you catch yourself spending too much time in your own head - I do have one final “trick” for you.

Spend some time trying to understand how someone else is feeling.

So for now, forget “building an audience” for the moment. Just listen to someone who wants help, and see if you can help them. 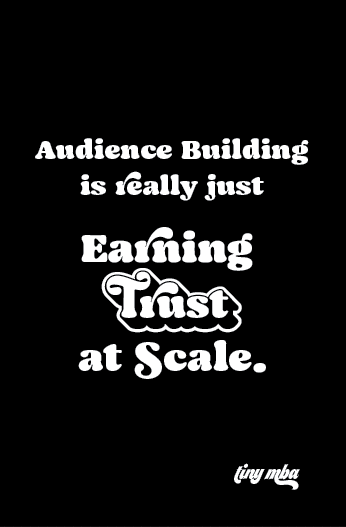 Audience building sounds so heavy. Try thinking of it as ‘earning trust at scale’ instead.

Whenever I’m stuck in my head, I try to get inside someone else’s head for a while. I put my effort into understanding their situation, really listening and empathizing.

If you can do it in public, that’s ideal. If you can’t work in public, treat it as practice for when you can or at the end, ask them for permission to share excerpts and scale your advice by turning it into an ebomb).

Because remember that confidence isn’t binary. It’s not something you have or you don’t, it’s a spectrum or a range that you move along with more of this practice.

And you certainly won’t build confidence by continuing to avoid it.