Why You Have to Develop an Investment Mindset

Nobody wants to fail. Not really.

After 4 years of teaching designers & developers to make their first product dollar, Alex and I have seen every kind of failure, from failure to start at all, to failure to pull the final trigger on a product with hundreds of customers just drooling to pay.

We can predict failure at 1,000 yards

Beneath the surface of ALL these different types of failure are just a handful of patterns. Here are the 4 failure patterns we’ve seen over & over & over:

I’ve written about all of these over & over til I’m blue in the face…except that last one, #4, Failure To Prioritize.

Or, as I think of it, Failure to Think Like An Investor.

It’s the most insidious and the least visible of all failure types.

You start a project, but it fails to pay off as quickly as you like, so you get distracted by something shinier (and more likely to pay you now, when you need it to pay your bills).

Or you’re in the midst of working on your product, and a client comes knocking, waving a big check (and cool project) in front of you. You say to yourself, “I oughta do this! I’ll come back to working on the product later.”

Or, if not a client, then a new employer with a new job that demands your time.

Or, a partner, who has a shiny startup in progress that you can join.

Either way, you never finish what you started. You never get what you set out to achieve.

And…you lose out on the magic of compound interest on your time.

The formulas you know don’t work any more

See, when you work for a company, or you consult, you get paid for your time, and that’s it. Spend your time, get a fixed amount of money in return. 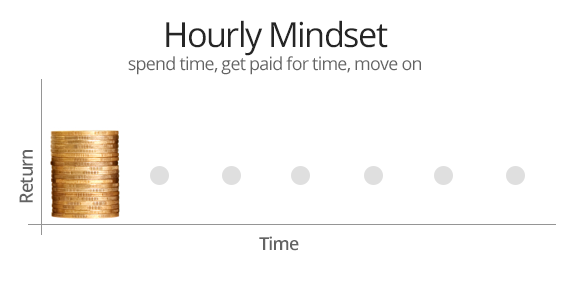 (NB: even if you’re a clever consultant who’s moved to weekly billing, or project billing, you’re still trading time for money. You only get paid when you have time to trade.)

That’s not the way products work. In fact, it’s the opposite.

Products are assets. And assets are what separate working stiffs from the truly wealthy.

An asset earns more money for you as time goes by, like time travel: 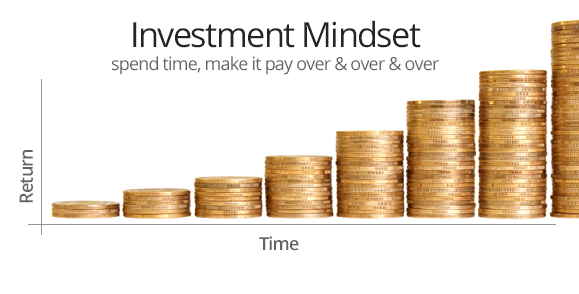 Let’s say you write an ebook, for the simplest example (with conservative numbers):

That’s $15 an hour…pretty awful for a skilled professional like yourself.

But the launch is only the beginning.

By the end of 6 months, 12 months, a couple years, you could have doubled, tripled, quadrupled, quintupled or more your “initial” hourly rate.

And you have built another incredibly profitable asset in the mean time: A list of happy customers who are likely to buy your next product, that you can design to build on your first one.

You build a system where, if you’re smart, every single thing you do increases the value of the time you have already spent:

My last blog post was worth $150/hour of my time, so far. That is basically the coolest thing of all time ever. — 30x500 Alum @sfioritto

That’s the result of acting with an Investment Mindset.

Temptation is an ever-present failure trigger

Even if you know this, and you get started, your potential success is fragile.

But afterwards…then what? The time is gone. The work you did can’t earn you more money. All it can do is bring you more hourly projects, and the cycle begins again.

And that’s the Hourly Mindset at work. It makes you spend your most precious resource - time - rather than invest it.

But eat enough cookies and they’ll turn on you. The Hourly Mindset lures you away from investing into things that will reap you long-term, lasting, ever-growing rewards.

The Investment Mindset is the way to creating financial independence. Spinach. It’s less delicious than a cookie, but it’ll make your future better.

The best part is that your skills make you an asset-creating machine. If you’re a designer, a developer, a writer, or a trainer, you can create investment assets straight from research + your own brain.

You don’t need to get lucky with real estate or the stock market.

And it’s not just “work on things that grow over time.”

It’s about judiciously using both your money and your time.

There are 3 layers to the Investment Mindset.

Now #3 — being willing to stop what you’re doing, to take a temporary hit for future growth — sounds like the same thing we’re talking about, right? Saying “No” to a sexy client in favor of working on an asset, a product.

Sir Arthur Quiller-Couch was a writer who knew more than just a little about creative destruction. To move forward, you often have to let go of things you so carefully constructed.

We’re willing to do it. Our class, 30x500, is a perfect example of killing something we loved.

For the first 3 years we ran the class, 30x500 was a multi-month email- and discussion-driven course. There were hundreds of pages of lessons to read, homework to do, and discussions to be had on the mailing list.

It definitely helped quite a few folks launch awesome product businesses. (Brennan, Jarrod, Richard, and Jim among many others.)

They stopped doing homework, they stopped moving forward, they skipped steps, and then because they felt bad about it, they disappeared entirely. (Failure types #1, #2 and #3 from my earlier list.)

These students didn’t ask for refunds; when we asked them what happened, it was clear that they had checked out and put their attention elsewhere, not that they weren’t learning.

We ran ourselves ragged trying to keep people active and working. It was exhausting.

Even though this class was extremely lucrative for us, Alex and I wanted our students to actually succeed. That’s more important to us than any immediate returns.

So we killed our darling.

So, we decided to kill the 30×500 class as it existed and start from scratch.

In 2013, we retired that old class for good. We held no more sessions. Instead, we spent the first 6 months of 2013 retooling the class, changing the format, redoing ALL the lessons, creating ALL-new exercises, making it 100% live with compulsory attendance. 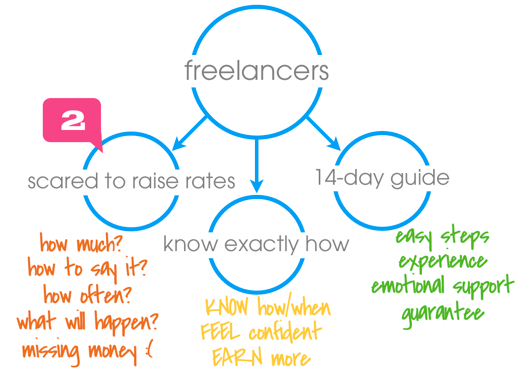 This example comes from the new 30×500 Bootcamp where we dissect the freelancer audience as an exercise! Almost zero theory, all practice (you learn the theory by doing, not being lectured to).

We also made it more affordable, aka cheaper.

We expected that haircut. We planned for it. We knew we would have to slowly build the revenue up again as we got more & more student success stories due to our overhaul.

Our overhaul achieved everything we hoped for. More and more students are actually:

More students than ever before, by percentage, have launched… and launched quicker, too, to good sales.

And, as our reward, each bootcamp is more profitable and successful than the last.

I can’t tell you how psyched this makes us. So happy. 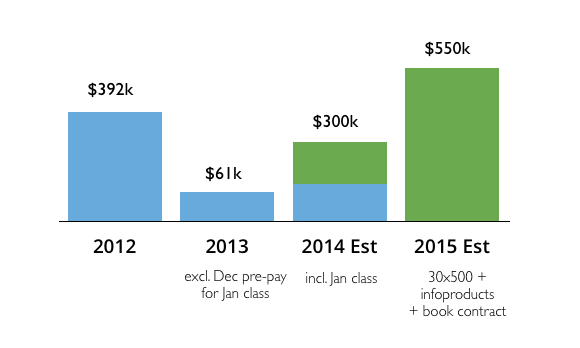 From this sacrifice (and trust me, it did hurt), we’ve gained so much:

And our sunk costs, those hours we spent in the past, are getting more profitable every day. In retrospect. Like time travel.

That’s the other benefit of the Investment Mindset.