Let's cofound a baby! and other phrases you should never speak

Three years in, I’ve learned a lot of hard lessons from bootstrapping a real paying product. The biggies are:

And that last one, #6, was the hardest to learn.

Lessons 1 thru 5 were almost all positive lessons, learning that things were easier & better & less terrifying than I’d imagined.

But working with the wrong people? That can be the death of you.

Shopping for founders on the intertweets

Which is why it’s so tragicomic to see people shopping around for cofounders like they’re shopping for toilet paper. 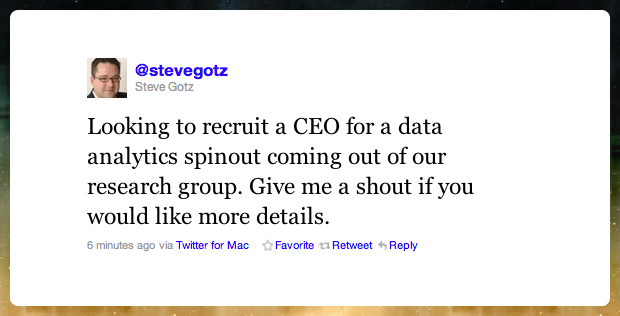 This guy isn’t looking for a cofounder in the strictest sense, but this type of thing goes on all the time.

Founders’ nights. Web apps where you list yourself as being interested in finding a cofounder, or being picked as one by somebody with an idea. Mixers. “Will you be my cofounder?”

Does anyone actually believe that this approach will result in lasting happiness?

Creating a business is a big deal

Creating a business – a real one – is possibly one of the biggest things you’ll do in your life. I don’t want to talk it up so it sounds like some sort of unassailable mountain of a goal, because it’s not; it’s very achievable. But if you really knuckle down and intend to create a business, not just hack on cool stuff – then it’s going to change your life. No two ways around it. Learning & growing and all that jazz.

Tell me: Is this really how you’d go about finding the right man or woman for you?

Starting a business really is like starting a marriage. Trust me, I know – my husband and I did both at the same time.

It’s true that we didn’t get started alone, and people have looked at that and accused me of being disingenuous about how “not that hard” it is to do it on your own.

But what they don’t know is that many of the people we’ve worked with have disappointed us. And every time, it’s been an immense blow not only to the continued momentum of the project, but to our desire to work on it.

In a way, we were both lucky and unlucky. We parted on good terms with our original partners after they lost interest and slacked off, leaving me & Thomas alone to work on Noko – but I know from many watercooler & bar stool conversations that this is an unusually rosy outcome. More often, a falling out with a partner kills the project dead.

Why didn’t this ruptured business association kill our app? Three reasons: partly because we had all agreed, up front, that our friendship was more important than the business; partly because they owned only a profit-share and not part of the product itself; and partly because I was willing to (in the interest of friendship) buy them out with more than they had earned so far.

Even then, the discussion we had to set this agreement was heartwrenching to everyone. We were all upset for a long time. I even cried (and I’m not much of a crier). Everyone was hurt and disappointed and wary and sad and angry.

Not gonna make that mistake again in a hurry

Since then, we haven’t given any ownership – or even profit-sharing – to anyone else. Not for lack of being asked. A couple of people we’ve hired to freelance have asked, and I said that we’d be up for considering it… later. When we’d all worked together longer. (This was only a couple of months in.)

Then, predictably, the people who asked for a stake in our company lost interest. We were still paying them an hourly rate, of course, but other things in their life took precedence. They became unavailable, or unpredictable, or unreliable. Work suffered, things slowed down.

I don’t hold that against them at all. I know what it’s like to be a freelancer, and they have their own lives and passions – and I don’t expect anyone else to be as passionate about our products as Thomas and I are. However…

I sure am glad that we didn’t bring them on as partners and experience Heartstomping 2: The Second Heart (You Don’t Actually Have).

You might say, “Well, maybe they wouldn’t have lost interest if you’d given them a stake in the product.”

Maybe not, but my gut says that a stake wouldn’t have changed a thing. Our original partners had a 50% stake in any profit generated from Noko, and they still slowly abandoned it. Originally, I thought this was a “company culture” thing that I could fix, but I did everything in my power and couldn’t stop it. It was like watching a trainwreck in slomo.

Now, after talking with lots of other indie biz people, I’ve learned that cofounder experiences like mine are just par for the course. Big cofounder drama is everywhere (just ask Noah Glass, the guy who led the creation of Twitter).

In short: Don’t obsess, don’t fantasize, and don’t rush in

You don’t need a partner. Don’t believe the myth that if only you had one, everything would be great. Even if you find the right partner, there’s no such thing as Happily Ever After.

A true partnership is a fantastic thing, but it’s also really rare. (And still fraught with issues.) And you can’t fake it.

In the end, it’s far better to be single than to marry somebody who’s wrong for you just because you’re lonely. The wrong person not only won’t contribute to the success of your venture, he or she will almost surely destroy what little good you can achieve. Not to mention sap your will to live.

Finally, get realistic about finding your business life partner. It’s almost vanishingly unlikely that you’re going to find the right person by asking every person you see, “Will you marry me?” or “Wanna be my cofounder?” Or even just limiting it to attractive people, it’s not a winning strategy.

Better to keep your eyes peeled, all the time, for somebody you’ve worked with for a long time, somebody you can predict, somebody whom (gender aside) you’d trust enough to marry and raise children with.

Cuz when you create a business, that’s what you’re doing.

This is not a sexy fantasy, but it’s the truth.