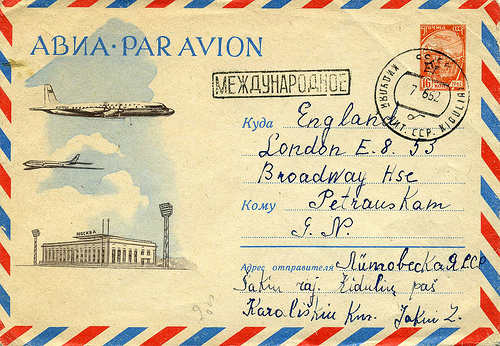 The date: February 2009. Two months after the (unglorified) launch of Noko Time Tracking, one month after the surprisingly not bad launch of the JavaScript Performance Rocks! beta. What with all that, the consulting, and the traveling, and the drama with our flakey partners in Noko, and being newly married and in a foreign country where I didn’t speak the language, and and and…I was having a really, really tough time. So I sat right down and wrote myself a letter. And signed it “with love” the way you do. Wait, that’s a song. Anywayz…

I know you feel like you’re having a rough time these past couple months. Things seem really swell, and you’re up up up, until suddenly a needle appears, and bursts your little bubble, and crash! Back down to earth again.

Because after the impact—smack!—you realize that while things were feeling so wonderfully amazing and fresh and new, that was probably because you were selectively forgetting about less happy-fun things that “have” to get done.

It’s like hitting the ground all over again. Smack! Smack! Ow!

I know that when this happens—and it’s happened several times—you feel guilty as well as deluded. You end up wondering if the happy stuff can only ever come out of denial.

New Business, I want to tell you something important: Change can be really hard.

I know you’ve experienced a couple of overnight life-changing epiphanies, which seemed effortless at the time, and were just totally awesome.

But that’s not usually how things work. And those lucky, beautiful, awesome breaks have made it unfairly difficult for all the ordinary, long-term slugging-it-out change that has to happen most of the time.

With ordinary, long-term, slugging-it-out change, sometimes there are “casualties.” Sometimes things don’t get done. Sometimes people don’t like you any more. That sucks, but not changing sucks more.

And I think that sometimes you forget that those beautiful overnight changes came from years of not changing at all. They were unacted-upon but desperately needed change, bottled up for years. The change champagne cork just finally exploded, and thank god for that.

Speaking of champagne, don’t forget to celebrate the victories you’ve already won…just because you find yourself looking around and what you see is a lot of stuff you’ve still got to do before you’re really free.

Think about it…you’re already ahead of schedule. You wanted to be in place by January 2010, and yet you’ll be in nearly full force by April 2009, instead.

That’s pretty awesome! And yet you are all angsty and morose that it’s not now, dammit.

I don’t want to say you SHOULD still be high on that, but it’s worth thinking about when you’re feeling in the dumps because not everything is done and perfect yet, and leftover bits of Old Business are still hanging about in the corners, glaring at you and making you feel tremendously guilty.

I know you feel stressed out, and harried, and overcommitted, and totally overwhelmed right now and pissed at everyone.

But remember: you’re still in transition. You’re fucking up. You’re also kicking ass. At the same time. That is possible, and yes it’s awkward, but that’s where the value lies, doesn’t it? If it were too easy, that’d make you mopey too. I know it would—I know you.

Butterflies look great a couple days after they come out of their cocoon. They really look neat inside the cocoon, too. It’s the bit in the middle, with the squeezing, and the wrenching, and tearing, and wrinkled wings, all damp with cocoon goo, that we don’t tend to think about. It’s amazing and miraculous, but also tough and uncomfortable and really quite gross.

But you can’t have the before & after without the in-between.

As long as you can survive my redonkulous butterfly metaphors, you’ll be all right.

Horrifying butterfly metaphors aside, I was right. Now, it’s 3 years and one week later. I quit consulting in January 2010 as planned, even though our product income wasn’t quite there yet. It was hard, again. I should have written another letter. But I made it through, and our business is going awesome. All our dreams are coming true.

I am so thankful to the Me of Yesteryear who, for once in my life, broke out of her cycle of short-termism, who for once didn’t give up, and stuck it out through all the hard shit. It was worth it.

What would you put in YOUR letter to yourself?