This article is about Entreporn and Mojito Island, and the emotionally manipulative fantasy narratives of “success.” Entreporn is a word I coined, on this podcast. Mojito Island is another term of art that you might want to know, coined by DHH himself.

If you ever wanted to understand the startup media through pictures of pretty furniture, this post is for you.

Look at this gorgeous fucking room: 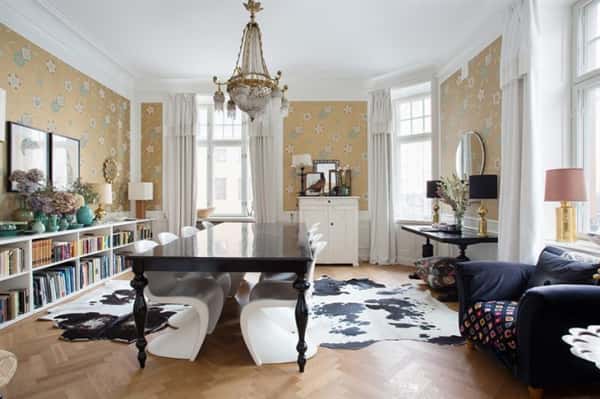 It’s not my style at all. Is it your style? It really doesn’t matter, does it – it’s gorgeous. Even if you wouldn’t want to live in it, it pleases the eye. (And if you would love to live in it… it probably makes your heart swell a little bit, at the thought of having it.)

Now imagine it’s not a photograph, but words:

Luminous gold tone wallpaper, with white, grey and teal flower motifs scattered about; framed in glossy white wood paneling; tall white windows, with full-length white curtains spilling to the classic honey herringbone parquet floor; a long, piano black dining table with turned legs, stately but modern brass lamps that harmonize but don’t go so far as to match each other, mirrors, tasteful low bookcases with fascinating objects, a collection of jadeite jugs with fresh flowers, a soft white highboy anchoring the room with much-needed height, an overstuffed and very casual blue velvet chair; sleek, matte Panton dining chairs, a textural and sculptural contrast to the matching holstein cowhides they rest on. The cherry on the sundae is the gorgeous brass and crystal swag chandelier, which takes what could be a cavernous ceiling height and instead makes it feel luxurious.

A welcoming, easy elegance… a mixture of high, low, and in between, neoclassical and modern, no pretensions.

Oh, I could write pages.

Given my (detailed, and spirited) description, words only, could you buy the things you needed and design and arrange a room that looked anything like the photograph?

If you’re starting to nod your head “Yes”… buddy, I got news for you: You’re lying to yourself. It seems easy because you’ve seen the photograph. But there’s no way. I couldn’t, and I even lived in an apartment with bones just like that one, and I know what herringbone parquet, jadeite, and Vernor Panton chairs are!

Now imagine it’s not about a room, but an entrepreneur:

Working on your deck at midnight; supercharged meetings with your co-founder. Important work dates at your local coffee shop, heads together, collaborating on the future. Days of excitement, of thrills, and of course, of drama… but drama from which you emerge, triumphant. Large bank wires to your account. People believe in you, to the tune of 6 zeros… or more. The press likes you (or maybe the press hates you…but you’ll show them!). A day when you feel down in the dumps, filled with doubt, is it all a fantasy? Can you ever do it? But the new day dawns and you crawl, bleary eyed, out of bed, because you know what you’re doing is important. Or at least profitable. And after a year, or two, or three — on the outside — you hit the climax. All those long hours, the fancy delivery Szechuan (not any ordinary Chinese), the Blue Bottle coffee, the artful whiteboarding, the stress, the hiring, the natural way you assume leadership of your team — the threads finally come together into a big fucking bow of a denouement:

You receive the offer.

You’ve read the description. Can you paint the reality?

No. It seems like you could, but you can’t. You can’t do it for honey parquet floors and a piano black dining table with turned legs, you definitely can’t do it for the life of a startup.

The story isn’t actually a story — it’s a pastiche. And the thing about pastiches is two-fold:

They’re the deceptive Karate Kid montage all over again: Wax on, wax off.

That’s entreporn, in a nutshell.

Entreporn is designed to seduce

It’s not real. It’s tantalizing. It’s got all the messy real-life stuff edited out – even though it seems detailed and realistic, hey, there’s drama in my montage! Wax on, wax off. It’s fake, safe drama, where the conclusion is pre-determined. There was no real risk, just enough of an illusion of risk to make it exciting.

(Conspiracy? Not at all. But sex sells. Lots of other things sell, too, but selling sex is easy even if you’re talentless.)

Before our mojitos, let’s take a break.

Let’s step away, for a moment, from the pornographic cesspit that is startup media and cleanse our mental palates with this gorgeous, luminous, refreshing room:

It, too, is seductive… but unlike the Startup Founder Montage, it’s real. Right? You can imagine yourself living in this room – or one just like it, but to your taste – and how relaxing, and refreshing it would be. The friends you would entertain. How peaceful you would feel.

The End…or is it?

In the Startup Founder Montage I wrote, the ‘story’ ended with “The Offer.”

But does it really? What is so transformative and powerful about receiving (or even accepting) a buyout offer? What movie ends on the passing of a check, the winning of a lottery, or the quitting of a job? None, that I know of.

If you’re a scriptwriter, the money has to be given significance. The acquisition has to have a reason. The liquidity event is near the end of the movie, there will still be an afterlude…a spooling out of cause and effect.

So, what comes after The Offer?

Mojito Island. Private jets. Fancy hotel rooms. Globe trotting. Life on Easy Street. Getting the girl — only in this case, it might be a real girl, or a girl-stand-in, like proving to everyone (especially yourself) that you are not, in fact, the worthless impostor you feel yourself to be.

Mojito Island is not a real place. It’s not even a real idea.

Once, over tapas with my biz partner Alex, I paused to take out my iPhone and bid on a matched pair of (replica) Jacobsen Egg Chairs. Alex, jokingly, called me a “Crazy Chair Lady.” It’s true… I enjoy a surfeit of seating. I know my chairs.

And let me tell you:

This room doesn’t work. It’s a dining room, but it’ll be an incredibly awkward if not impossible place to dine. Here’s why:

That’s Mojito Island for you, the pinnacle of entreporn, the idea that, after the denouement, after the credits roll, you will sit on a beach with ice cold minty booze, forever.

It looks better than it works. Guaranteed.

Forever is a long time, and unless you’re the world’s worst at what you do, you do it on some level out of love, enjoyment, or purpose.

Why would you enter a field for enjoyment, build something you care about, and then…discard it? Just for money? For the fantasy of a life-long vacation?

There’s a reason that mortality rates increase dramatically for retirees compared to folks who keep working.

So, you’ll get bored. Then what? You’ll have to start again, from scratch. And what if you can’t make as big a success as you did the last time? What then? You’ll have given away your best work, for what? A life-changing payday?

Have you heard of taxes? The payday math on startup acquisitions isn’t that great.

But don’t kid yourself — you won’t be on Mojito Island in the first place, because acquisitions don’t happen without employment contracts. Two to four years working in the employee saltmine before you can get on with your Mojito Island disillusionment tour.

And by that point, from my many second-hand observations, you’ll be crushed, inside and out. Most bigco’s that acquire little startups do so in order to destroy them (on purpose or otherwise).

And let’s not forget there was a reason you chose to not be an employee to begin with.

And why startup stories especially are long on ra-ra-ra!! independence, make your own way, be your own boss, change the world…and yet remain silent on what happens afterwards.

It’s the same reason why still photographs can’t convey the reality of living & working in a “beautiful” room. Why there are never toothpaste tubes or kids’ toys or litter boxes in fancy home tours, much less mess and clutter.

Why nobody shits in the movies. Or gets divorced 10 years after the triumphal orchestral swell.