Running the Numbers - Your First Infoproduct 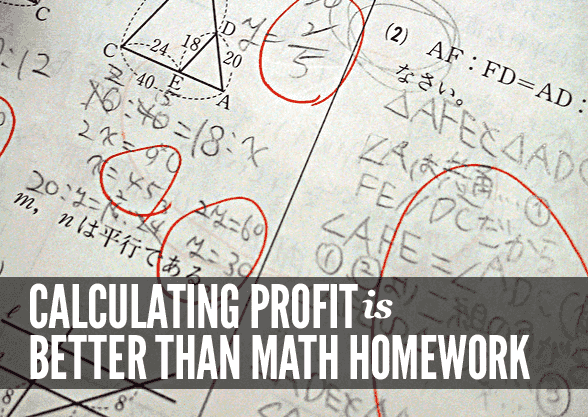 If you’re a freelancer, doing creative-y things, then it won’t take but a small push to get you from No Products zomg! to Hey I Gots a Product.

Let’s look at the numbers for Your First Infoproduct.

First up: Your Freelance Income

Say you typically charge $75/hr. Your rate may be higher or lower; adjust as necessary.

I bet you could make and begin to market an infoproduct in 75 hours or fewer. Dave Navarro says you can do one in a weekend. I agree.

That means your infoproduct would have a freelance opportunity cost of $5,625 (75 hours • $75 hourly billing).

Don’t freak. It’s not hard to sell 75 copies. If you have an audience of 200 to 400 people, and you create a product offer that speaks to them, that solves a problem for them, you’ll have no problem at all.

So, $5,625 (Hourly Potential Earnings, an opportunity cost of creating a product) minus $1,425 (Product Launch Earnings) is $4,200. Let’s call that the Wage Slave vs Freedom Gestalt. That’s still a big number, in favor of freelancing.

You’ve done a little bit of other marketing: put a banner in your sidebar, blogged about your launch, posted on forums with it in your signature, basically made sure you didn’t commit the criminal mistake of Not Tellin’ Nobody.

Ehhhn: The Sound of a Mild Additional Effort

Now, you’re a smart cookie. You know a product won’t coast forever just on one push. (That’d defy physics, for one thing.)

So you gird your loins and do you a little bit of extra marketing. Take two hours of your time ($150 opportunity cost) and write 3 more blog posts that appeal to the audience for your book, create an infographic, release a bit of open source code, post more on forums, and so on. Update your sales page with some customer quotes. Send a couple review copies out. Your Gestalt increases slightly.

Hey, what’s this you find? That tiny bit of effort was almost like another launch!

You now rest on your well-padded laurels. Your monthly sales are up to 20 copies a month on average, though, because of your extra bit of marketing. For the rest of the year (10 months), you earn an average of $380 a month in sales – $3,800 in total.

Congratulations. You did better than break-even on on the opportunity cost, by 10.2%.

Your Wage Slave vs Freedom Gestalt is a negative number: doing a single freelance job, for the same amount of time, would have been 10.2% less profitable.

The Numbers Again: In Short

That math is a no-brainer, if you ask me.