Have you ever run a launch?

Because, if you take yourself and your ambitions seriously, you WILL be doing a launch at some point!

Launches don’t work the way you probably think they do

The ideal of the Big Launch Day is this: You work hard for months, there’s a montage, maybe Eye of the Tiger is playing, you finish your masterpiece with a flourish, you hit Launch. Meanwhile you’ve accumulated a horde of True Fans and eager customers who are SO PSYCHED for YOUR PRODUCT that you’ll be FLOODED with orders the very second after you send a little email that says “I made a thing!”

But… that’s just not how it works. Not even for hotly anticipated products launched to eager hordes.

And the gulf between Expectation and Reality for the Big Launch Day leads to a sadder world.

Not just because the Big Launch Day is disappointing and hopes are dashed and fewer sales are made.

The problem goes much deeper: I cannot tell you how many smart folks I’ve known who’ve made great products, launched them in exactly the way I described above and then, when the hordes failed to create a tsunami of sales notifications… gave up, called their product a failure, called themselves a failure, shelved the product, and shelved their dreams. This happens to a LOT of people! Maybe you’re one of them.

The world is poorer — they are poorer — because they believed in a fairy tale.

But, this doesn’t have to happen to you, because you’re here, and you’re about to learn the truth.

There is a fundamental underlying rule of emotional physics that dictates how and when sales are made.

I call this rule The Heavy Metal Launch Curve. 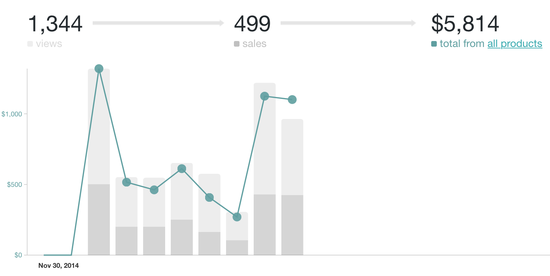 That’s a real screenshot from the initial launch of my book, Just Fucking Ship. 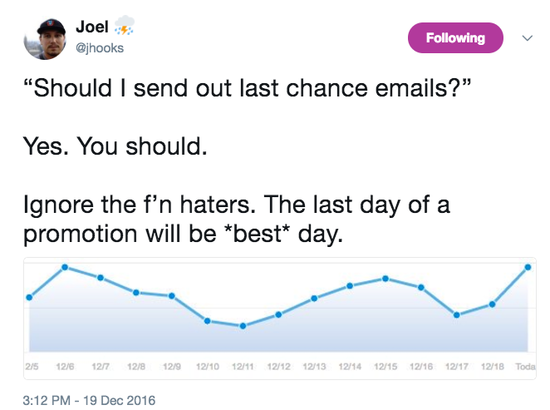 That’s a tweet from Joel Hooks, one of our absolute blockbuster 30x500 successes… you may know him as the cofounder of Egghead.

🤘 Do you see the Heavy Metal curve? 🤘

But there’s often an equal or even bigger bump on Close Day.

In between, it’s kind of Meh.

People are busy. They’re distractible. They’re poor poor at follow-through. Their motto is, “I’ll come back to this later.”

People who don’t know if they want to buy will put off the decision to decide to buy… or not buy.

They’re busy. They’re distract-able. Making a decision is work (no snark here! it really is!). Even a “no” decision takes work and commitment. Their motto is, “I’ll think about it later.”

So if you just announce your thing and expect sales to roll in, you might make a few… but you’ll be missing out on a huge chunk of “later.”

That’s why you’ve got to have a deadline.

For “come back later” buyers, a deadline gives them a reason to do the thing they already intended to do.

For “think about it later” buyers, a deadline gives them a reason to decide YES… or NO. (And a clear No decision is vastly preferable to you, the creator and seller, than a Schrödinger’s “maybe.” Believe it!)

A deadline can be…

There’s some pushback in the nerdy product world against “artificial scarcity,” BUT that’s only one way to give your potential buyers a deadline. For any given product, you have all kinds of options that are totally above-board reasons to call an end to an offer.

For example, in 30x500 we’re only allowing in 75 new peeps because we’re beginning to do twice-monthly Q&A sessions and we don’t want to overwhelm ourselves or our alums!

AND so we can keep everybody somewhat on the same page and not do launch-mode-forever (which is frankly exhausting), the launch lasts a little over a week. When you run a class, there’s a power and solidarity in having cohorts.

For JFS, I gave my early adopters a special discount that expired when the book was officially launched. Why? Because they took a chance on a book that was unfinished. I rewarded them with a special price, they rewarded me with their trust (and sales). That’s win-win.

So, create a deadline

Your buyers are begging you — with their procrastinating behavior — to give them a reason to sit down and either act, or consider the question of whether they want to. Deadlines make it easier on them. A deadline doesn’t compel anyone, it’s not a hard sell. You have to be a manipulative genius to sell somebody something they don’t actually want… and let’s face it, if you could sell like that, you wouldn’t be here (and neither would I!).

Deadlines bring clarity. People love clarity. Give it to them.

And tell them about it.

You can’t skip this part. Just as Joel said, you should send that last reminder email.

If you skimp out on the “telling” part, your customer won’t know — or remember — and the clock will run out before they had the chance to register, buy, or even decide to buy. Sadface.

And remember… the Big Launch Day is ONLY THE BEGINNING.

Ready to create your own products that sell?

Sign up to learn our step-by-step process for building products your customers need, want, and are ready to buy

Enroll in the 30x500 Academy today!
Find out how to get started along with our next batch of students