What I learned making a living on eBay

Scene: A fancy tapas restaurant. Dark wood tables and candle lighting. Me and my business partner, Alex. As the ham croquettes arrive, I whip out my iPhone and tell Alex, “Just a sec, I need to bid on an auction.” He laughs at me. He calls me a crazy chair lady. I laugh too, because I win the auction. I now am the proud owner of 2 sleek turquoise egg chair reproductions. Later, when I sell off some other furniture, two separate dealers drool over them. “Where do you find all these things?” they ask. eBay, I say. 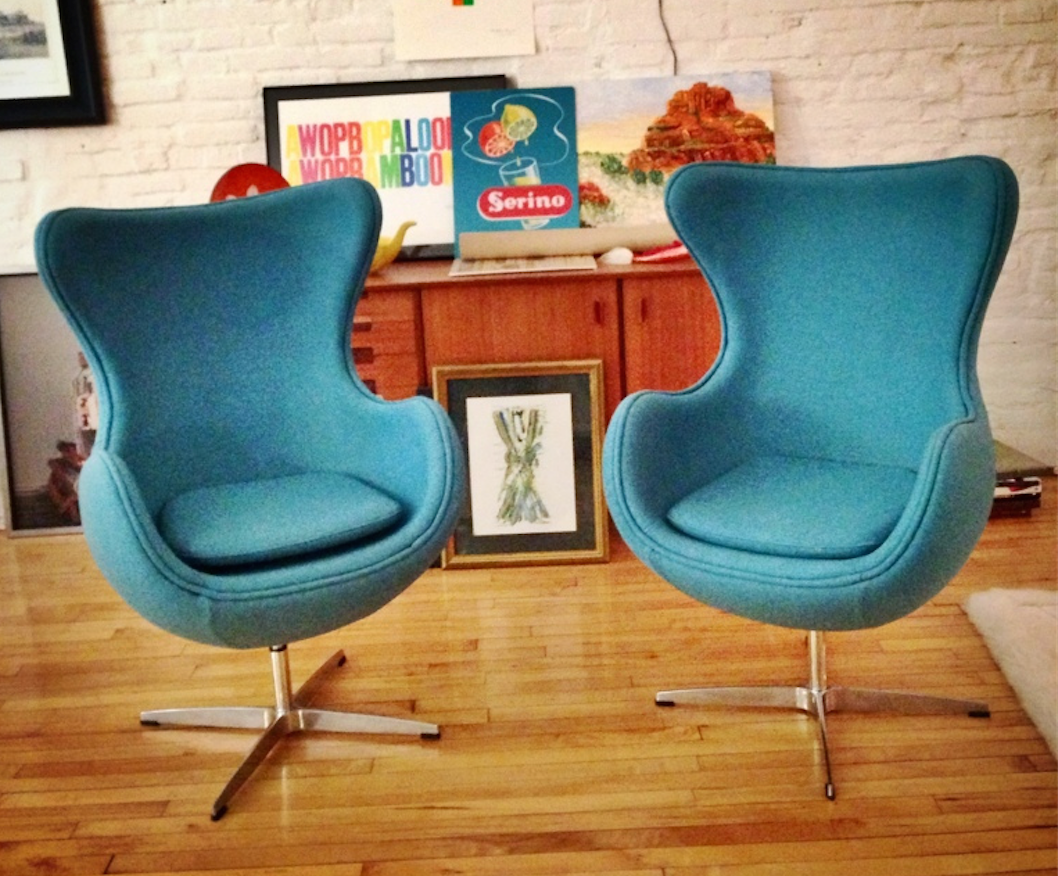 I’ve furnished our house with truly awesome vintage furniture, rugs, artwork — nearly all found on eBay. My friends may tease me for my obsession (and chair collection) — but they never make fun of what I pay, because I get great deals.

That’s because I know how eBay works. How to buy low and, conversely, how to sell high.

The principles for selling software and ebooks aren’t that much different.

This is a story about how I applied business tactics to eBay selling and made a relative killing; what I learned doing it, and what lessons you can apply from my story today.

I used to be too broke to keep things.

I’ve had to buy my own things, pay my own way, since I was a young teenager. Did I want a camera, a lens, a computer made this decade? That meant saving, scrounging, hunting for deals, buying used out of the Pennysaver, eBay or Usenet. Needed the cash? Time to swap, bargain, or sell again. 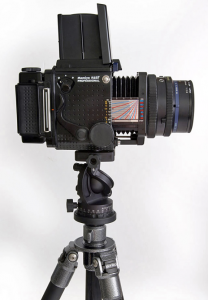 eBay was my pawn shop.

This way, I got to enjoy things I couldn’t ever have otherwise afforded to keep.

Here’s just one example: When I was 16, after a long search for a good but affordable medium format camera, I scored a pair of Mamiya RB67’s with lenses. I paid just $900 to a fellow photographer on a Usenet group.

Thing was, I didn’t really have $900 to spare. So I cleaned one of the cameras up — reglued and oiled the leather, dusted, polished, lovingly photographed it and lavishly described it, and auctioned it off…for nearly $900 by itself.

The net result: I was the proud owner of an high quality medium format camera for about $100 and some time. And the original owner, who sold it to me, had “lost” out on a consumer surplus of $800.

In time, I realized that if I could flip a 30-year-old camera and make a little bit extra for my efforts, then there must be a reproducible way I could use eBay to make money.

Luckily I already had a huge advantage: 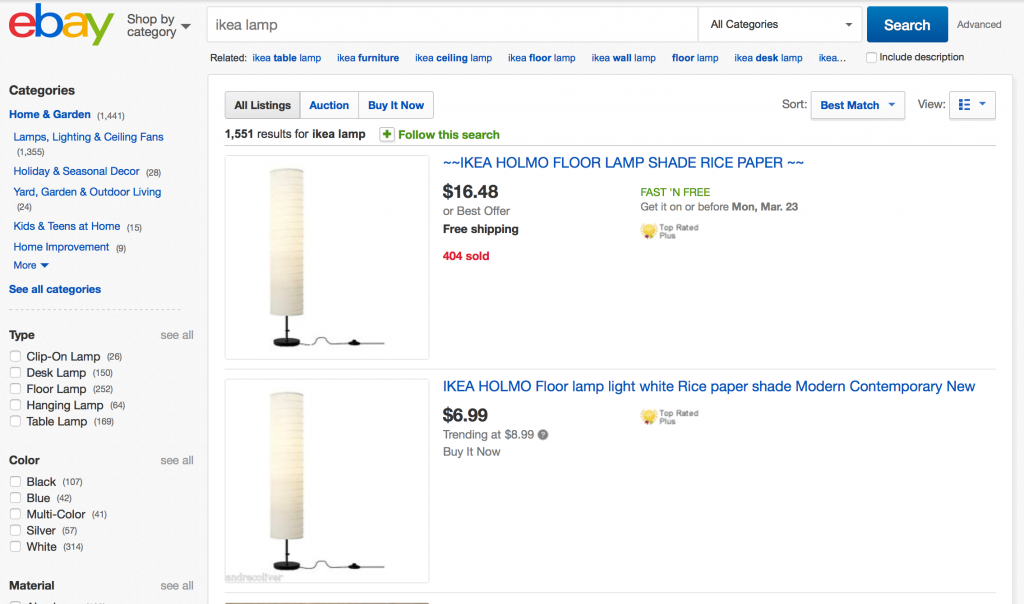 I spent a LOT of time lurking on eBay…

Because I had way more time than money — and, frankly, because I was a spooky little girl — I’d do hours of research before either buying or selling.

I didn’t just limit myself to auctions for things I had or wanted, though…I read just about everything. I read whatever caught my eye. Over the years, I’ve probably looked at over 100,000 auctions at least. Quite probably more.

It was all data into the hopper.

As I crunched all those inputs — as I studied all the auctions that sucked and the ones that rocked — I came up with a formula for kicking ass on eBay auctions. (Included below.)

I also found a new business.

I spotted a hole in the market…

Or rather, I spotted people trying to fill the hole, and doing a not-so-great job at it. They still got results…but I knew I could do a better job, and get better results.

What was this hole?

Back in the early early 00’s, IKEAs were rare.

But everyone knew about them and, more importantly, lusted after them. This was before Target had inked their first contract with a big designer (Michael Graves). Everything out there in Home Decor Land was either ugly and old-fashioned, or horrendously expensive, or both. Except IKEA. Everybody was hungry for IKEA. And IKEA didn’t ship.

People were taking lamps that cost $5 - 9 and reselling them on eBay for profit. Most of the sellers were only making a few bucks here or there.

I knew I could do better.

My formula for a high-price auction

The rules I discovered as a teen still apply. If you want to sell your item for above-average price, these are the rules:

That’s how I could take a $5 paper lamp and resell it for $15-25+. Before you cry foul, know this: I never set the price. The customers did. They wanted the lamp; they chose how much they felt like paying; they got something they couldn’t have got any other way.

Them’s the rules. They work. 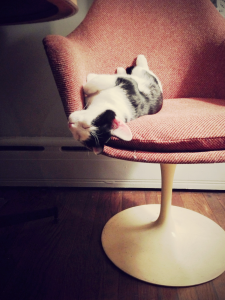 Conversely, if you can find an auction that fails these rules, you may have found yourself a whopper of a deal. (As long as it’s not hiding a problem.)

I’ve never found an Eames chair in a dumpster like some people, but I did get 3 genuine Saarinen tulip chairs, produced by Knoll, for what I like to call “IKEA price.” (Pictured left.) I paid not even $200 a pop. All because the seller assumed they were reproductions…because the sticker was gone & he couldn’t be bothered to spend 5 minutes looking up the markings on the base. They were the real deal, and the BR51 stamped into the aluminum told me so.

It’s the romance of commerce.

The biggest lesson of all, though, is this:

Creating a desire for something new? Nigh impossible. For all of history, the human animal has never changed in its core wants. The top 1% of marketers can tie a pointless or category-busting new product into one of those core wants… like magic. You can’t. You will likely never be able to. It takes a lifetime of obsession to be able to do that. Don’t kid yourself, you’re not that good.

So what’s an average schmuck with no special marketing superpowers to do?

That’s what I did. That’s what I’ve always done. I’ve never attempted to boldly forge a new category where no marketeers had gone before.

I saw evidence that people were hungry for something, I found a need, and I filled it…better than the other guys.

As a 16-year-old, I used the above rules to earn between $600 and $1000 each month in profit from, essentially, drop shipping a mass produced consumer good. Believe me…that’s a much tougher market than technical ebooks and business software.

You can use the same rules to sell your ebook. Or app. Or workshop. Or whatever.

After the lamps, I used the rules to sell deal packages — in the days pre-RetailMeNot, I’d spend hours every week putting together coupons and sales on tech & AV stuff, bundle it into a nicely styled HTML page, and sell it on eBay for email delivery. I made good money on that, too, and saved my customers money, all without something physical to ship or track.

I don’t price my software starting at 99¢ because it’s not an auction, but I do slavishly only sell things people already need & want…from time tracking software to programming workshops to productivity ebooks to this. Let other people forge the new market.

When those products cause problems for their customers, I’ll be there to rescue them.

Give people what they need.

Learn how I do it

I’ve spent my whole life studying businesses in the wild. You can learn from me how to get started doing this from Day 1.