The 4 Mistakes I Made Setting My Annual Goals 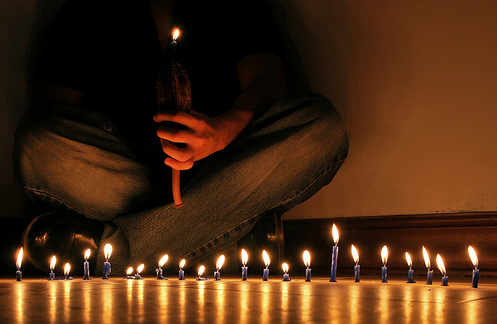 This is a meditation on goals.

Here is an example of a year’s worth of goals I set in the past, including which ones I succeeded or failed in reaching:

I badly wanted to scream at how shitty this year was before I reviewed my goals…but objectively I still did a lot. I’m at peace with it. Especially because a large percentage of what I did achieve is not reflected in my goal list, which leads us to…the mistakes.

Here are 3 things I actually did wrong with my goal-setting itself, and which I’ll do right this year:

Mistake #1: I set the wrong kind of goals.

Setting an audacious revenue goal like $700k or 100 student products just…seems like the thing to do. Very fortune cookie-esque. It is specific and measurable and all that jazz — not impossible at all. But it’s still the wrong thing.

A huge target like that? It’s not really a goal itself, but an organizing principle. A reason to set other goals.

Which I know, duh. Which makes me feel a little bit silly for making this obvious mistake. I blame the blank content box in Wordpress Create Post screen. It made me crazy.

So yeah, no shit: Growing revenue is important. And we definitely did grow revenue, 34% year over year, which was about 13% more growth than last year…and nearly all of that growth came after June, when we started to put a lot of things in place. (What things? That’s another blog post.)

I’m feeling pretty great about that: I may have missed the (stupid) goal, but I definitely moved the needle noticeably.

But if I’d set out a list of 12 projects that would influence revenue instead, we would have gotten even closer. I would have started sooner, and done more. It would have been easier to delegate, too. Ditto for 100 students etc etc.

This year when goal-setting I will view my “audacious” goals as reasons, then fill up my goal list with projects, the building blocks that inspired by the reasons. Example: Create a sales process, vs a target number.

Mistake #2: I forgot that I can’t control outcomes.

A lot of my goals were outcome based: Secure a contract, hit a revenue goal, help 100 students, etc etc.

The thing is I can’t control outcomes. I can only control what I do. (And also: How sure am I about that outcome anyway? More on that in Mistake #3.)

No matter how much I’d like to imagine that I know all the levers to pull and widgets to twiddle, no matter how much I like to believe that if I do everything right I will be rewarded, I can’t really say for sure.

I could do everything right and still not meet my goal. To which I say a resounding Meh.

This year when goal-setting I will specify goals as projects with action goals inside them. Things to do, not things that may or may not happen after I do.

Mistake #3: I changed my mind about outcomes.

Changing your mind isn’t a mistake, but a fact of life. Failing to account for mind-changing is the mistake. And perhaps the main reason why goals make excellent servants and terrible masters.

Let’s talk the book contract, shall we? Alex and I said we wanted to write a traditionally published business book for good reasons: To reach the mainstream, to significantly widen our audience, to spread the gospel, to have the force of a publishing company behind us.

And we had the great fortune to speak with Ramit Sethi (I Will Teach You to Be Rich), Josh Kaufman (Personal MBA) about selling & writing a bestseller… as well as Kathy Sierra and her husband, inventors of the best-selling Head First series. (And I had the ridiculous good fortune to get an advance copy of Kathy Sierra’s new book, which is about creating a sustainable best seller.)

And thanks to lengthy discussions, their generous sharing of their time and advice, Alex and I decided to run like the dickens from the traditional publishing world. And self-published the first brick in our book plan just a month ago to pretty great results.

So the goal? Officially: FAIL. And yet unofficially? A success.

Which is why rigid adherence to goals is a mistake… luckily one I only nearly made.

This year when goal-setting I will remember all the things I hate (delays, bureaucracy, gatekeepers… aka publishing) — and also that to seek facts & advice to make a final decision is itself a worthy goal.

Mistake #4: I didn’t create a system of check-ins.

I’m an always-moving-forward kind of person, for all kinds of reasons. I’m not really big on dwelling. I take things as they come.

That’s my biggest regret: I have a chronic illness that more & more looks like the result of a genetic disorder. Much of that is outside of my control. But the worst of the worst? There were several definite things I could have done to stop that slide… if I had not failed to create a system of check-ins. I spent so much more time at home, in my house, in bed this year than I have in a long time.

Conservatively, I have lost 50-75% of this year due to illness.

This year when goal-setting I will make setting up systems to take care of me my first and top priority. So this never happens again.

Then I will make check-in systems for my other goals, too. The frog boiling principle applies to every one.

What are you going to do differently this year with your goals?

(PS: If you need assistance with the finishing-and-shipping part, Just Fucking Ship will help.)