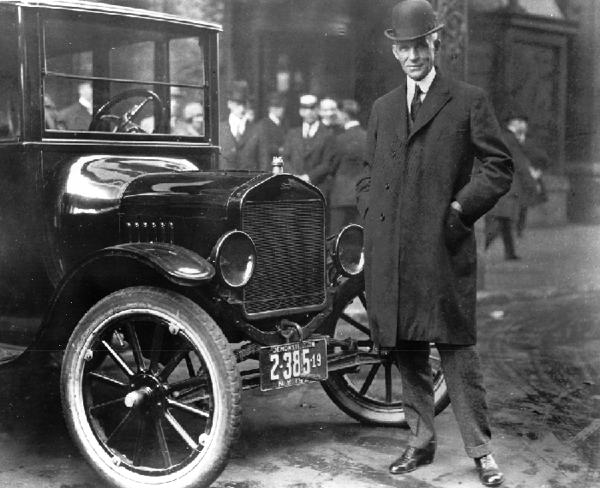 Henry Ford on Startup Ambition - Are you in the 5%?

What’s speaking to me today is the concept of ambition. Or rather, desire and capacity for self-betterment.

This is the final installation of my highlights from Henry Ford’s stellar autobiography (or really, autobizography), My Life and Work.

You can read along yourself or even listen to it as an audiobook, both for free thanks to the public domain!

If there’s one thing I’ve learned from working with others, it’s that our levels of ambition are all so very different.

There is no difficulty in picking out men. They pick themselves out because — although one hears a great deal about the lack of opportunity for advancement — the average workman is more interested in a steady job than he is in advancement.

It’s easy to pat ourselves on the back when we read a passage like this: Hey, I’m gonna do a startup. I’m gonna self-nominate. Hey, Ford says I’m special!

Scarcely more than five percent, of those who work for wages, while they have the desire to receive more money, have also the willingness to accept the additional responsibility and the additional work which goes with the higher places.

But do our actions back that belief up?

Do we actually, on a day-to-day basis, deliberately take on more responsibility? Take risks? Ask for more pay? Make ourselves useful beyond the call of duty? Go further?

Or do we just pat ourselves on the back for being special, and use that as an excuse to not do anything? (We could, after all. We could start at any time.)

But the vast majority of men want to stay put. They want to be led. They want to have everything done for them and to have no responsibility. Therefore, in spite of the great mass of men, the difficulty is not to discover men to advance, but men who are willing to be advanced.

Ford is talking about discrete traits in discrete people:

Joe wants to be led, Jo will get out there and kick butt.

But I think this applies just as well to internal divisions. We contradict ourselves. We contain multitudes.

Maybe we’re 90% Joe, who just wants to be led. Even in our iconoclastic entrepreneur-worshipping pivot-frenzy, we want to be told what to do. We want somebody to guide us. Then, if we follow the guide – if we follow the nonconformist herd! – we can blame somebody else if it doesn’t work. Plus, of course, we’ve saved ourselves all that pesky higher thinking.

But maybe we’re 10% Jo, who’s willing to take on the extra, the risk, the work, the uncertainty of thinking, doing, reaching for more. The deciding.

Being wholly responsible for making the decisions that could create chaos in our lives.

The accepted theory is that all people are anxious for advancement, and a great many pretty plans have been built up from that. I can only say that we do not find that to be the case.

Henry, I’ve gotta agree with you there. Even for ourselves, we set up plans which require super-human confidence, intensity, commitment, production. Then, naturally, we fail to rise to the occasion, because we’re only human. Then we say “Well, it wasn’t meant to be. I’m not good enough.”

No matter how right they feel, those pretty plans don’t reflect reality.

Maybe the real strategy is to admit that we are 90% Joe and only 10% Jo, and figure out how to work around – or with – that fact. To make it work for us instead of against us. To set up plans which support how we really are, instead of how we think we ought to be. Learning to create durable habits, maybe.

In conclusion? Well, other than “Henry Ford is brilliant and relevant” and “Wow, 5%?” I don’t have one for you. Or me. Yet.

As a parting shot, though, let’s refer to the best dialogue writer ever, Joss Whedon, in the form of Buffy the Vampire Slayer:

Buffy: I thought it was gonna be like in the movies. Y’know, inspirational music, a montage, me sharpening my pencils, me reading, writing, falling asleep on a big pile of books with my glasses all crooked, ‘cause in my montage I have glasses. But real life is slow and it’s starting to hurt my occipital lobe.

As in Buffy, so in life.