Richard had built over a dozen apps. What was different about Stunning?

Alex Hillman
Success Stories > Richard had built over a dozen apps. What was different about Stunning? > you are here

“Like so many people, I was trying to come up with good ideas that could potentially probably maybe one day make money. That doesn’t work (or if it does, it’s because you get lucky, and that’s not predictable or sustainable). “ - Richard Felix

Richard Felix is a great example of the “quiet successes.” You might not recognize his name, or even the name of his app. He doesn’t have a giant twitter following. He isn’t a prolific writer.

But as of today, his SaaS Stunning has recovered an impressive 1.7 Billion+ (yes, with a B!) in recurring revenue for his customers. And that’s what matters.

Stunning wasn’t Richard’s first launch. He’d launched before, with mixed (and mostly disappointing) results. So when he wanted to quit consulting and support himself and his family from product revenue, he knew he needed a system he could work with.

In this interview, you’ll find out what made Stunning different from Richard’s past projects, and how 30x500 “rewired his brain” to spot and understand his customers’ pain and problems.

Note: this interview has been edited for clarity.

Alex:
How did you earn your living before you launched Stunning?

Richard:
I had a full time job at a local startup. When it ran out of money, I found myself contracting for awhile.

Alex:
And had you tried launching or selling other products before?

I launched my first app in 2006, when Ruby on Rails was just starting to take off. It was targeted at a bunch of problems in the restaurant space that still exist, and which will always exist. It was technically good; good enough to land me a few job offers and get me flown out for interviews in New York and such.

But there was a huge missing piece: none of the people who I was trying to sell it to cared one bit about solving those problems (or even considered them problems to start with).

So although it wasn’t an immediate failure, it never made any money and eventually I shut it down, thousands of dollars in the hole.

I also worked on a few ideas with my friend Chris Coyier of CSS-Tricks, and we accidentally made a profitable product together called Are My Sites Up in 2009.

Looking back, I think the reason that product was a success is because we followed some of the 30x500 principles, even though we didn’t know them at the time!

Alex:
What was the draw for you when it came to creating and selling products? Did you have a goal in mind, financial or otherwise?

Richard:
My main goal was to be able to build something that could support my family, and to have my income not be so directly tied to the hours that I worked.

I’d also had some not so great experiences with bosses and clients. A lot of times they’d ask for advice and then completely ignore it.

I wanted to be more in control of my work life, and to have the freedom to go where I wanted, when I wanted. 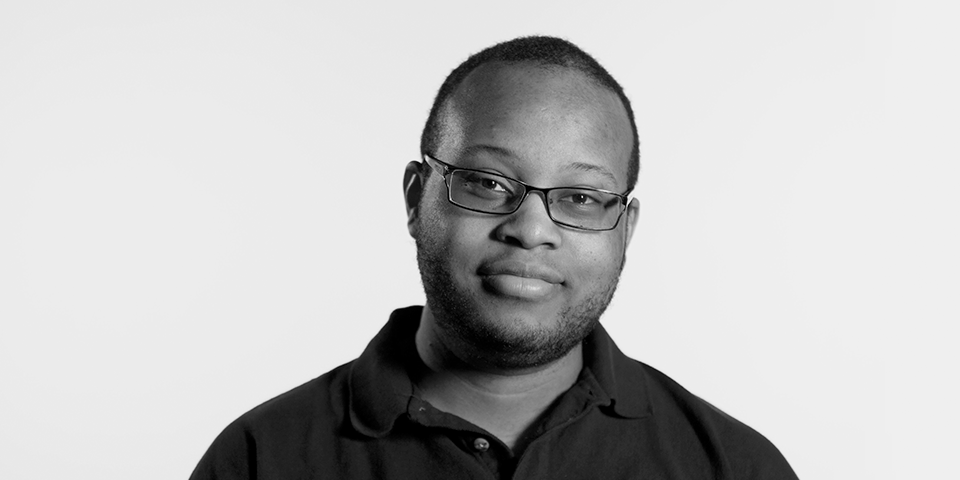 Alex:
I know you built Stunning on the side of your consulting work. How long did it take from launch to when you could quit consulting?

Richard:
It took about a year. I launched Stunning in late 2012, started charging for it in January of 2013, and by August of 2013 I could pay myself a full-time salary from the product.

Alex:
What was different about your approach with Stunning vs the previous apps you’d launched?

Richard:
Like many people, I was trying to come up with good ideas that could potentially probably maybe one day make money. That wasn’t working, and when it did it wasn’t predictable or sustainable, because I’d gotten lucky.

In 30x500 I learned how to identify real problems, and that there is a market of people who are willing to pay for those problems to be solved. I just had to work on products that solve them.

In a way, 30x500 rewired my brain. Now I look at people tweeting about their latest ideas and just shake my head because I know that they are probably going to fail within 6 months. I can see potential business land mines coming from a mile away now, and avoid them. Now I see Sales Safari as a cheat code for building a successful SaaS app.

I have a lot more confidence in my business because I know that if I start with Safari and follow the system, I can be confident that people will want what I’m building before I write one line of code. Identifying and fixing problems that your target market considers worth paying you for is definitely the easiest and most reliable path to success.

Alex:
Can you describe some of the early Sales Safari experiences that led to Stunning? Who were you researching? How did you use that to determine what to launch?

Richard:
I was researching people who owned and ran SaaS apps. Since Stripe was so new at the time, I was finding that people with more mature SaaS apps were switching to Stripe and realizing that some things were missing that they needed on day 1, such as receipts and dunning emails.

I figured out that the pain was that people were excited about using Stripe for their apps, but not as excited about the extra code they’d have to write to do dunning.

That’s when I had the realization that I could make a product out of the dunning code I’d already written for Are My Sites Up! I just needed to extract that code and make it usable for anyone’s app.

The first version of Stunning was born shortly after, and the home page copy was written specifically to target developers with that pain. At the time, Stripe didn’t even have a way to send people receipts for their purchases. So I made a Receipts plan to get some of the lower hanging fruit ($10) and a Dunning plan, at $30.

Alex:
I think it’s very interesting that you noticed this pain specifically among people with more mature apps. How did that inform your decisions of what to build, and how to market?

Richard:
It looked like newer apps didn’t even know what dunning was, much less that it was a problem.

And even if they did know, failed payments weren’t really become a problem worth automating until they got to a certain scale. People with mature apps tended to be easier to reach because they already felt the pain of handling failures manually. Instead of trying to explain why failed payments were a problem, I could just connect with their existing pain and present the solution.

Alex:
What did the first version of Stunning that you charged for do? What didn’t it do?

Richard:
I just looked and the first version of Stunning was even more bare-bones than I remembered.

It literally just sent dunning emails. You signed up, connected to your Stripe account, edited the email templates. That was it! You could be saving customers within 10 minutes, because we provide default email content for every type of email that we send.

I dug up the actual homepage I launched it with. I totally photoshopped that dollar sign onto the guy’s chest, haha! 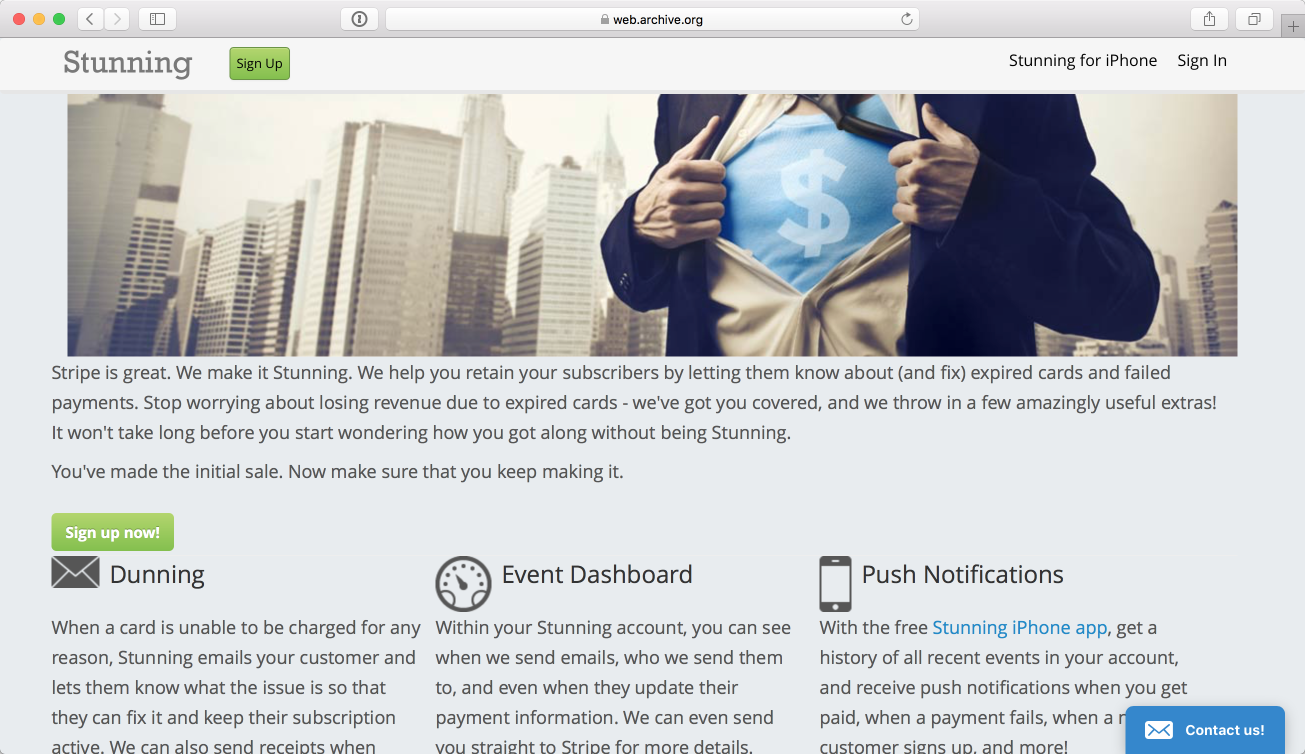 Alex:
How did you get people to learn that Stunning existed?

Richard:
Since I was focused on people with established SaaS apps, I figured that they’d be coming to Stripe in much the same way as I did, looking specifically for dunning that was built on top of Stripe. So I made sure that my SEO was good and that I was the first result in Google for “stripe dunning” by making some keyword-based domains (like http://dunning-for-stripe.com and http://receipts-for-stripe.com ) that appeared at the top when people are searching for terms around Stunning. I keep up with people talking about @stripe on Twitter, and help where I can.

I started blogging about topics and problems related to Stripe, failed payments, SaaS emails, and other SaaS-related subjects.

I also released an iOS companion app (using the reach that comes with being in the App Store to promote Stunning) and I added a free plan that just sends push notifications to your phone when something important happens in your Stripe account. It’s turned out to be good, there’s no support burden and the more people that know about Stunning, the better, because when someone mentions the problems that Stunning solves, we get good word of mouth.

It took a long time, but I eventually got listed on the Stripe Integrations page.

I also have a free email sequence focused on helping people make more money with their SaaS. That catches people who come to the Stunning website but need to be sold to over time.

Alex:
How have you kept your marketing momentum going?

Richard:
One of my big strengths has always been to make tiny, free apps to promote my paid apps. Projector is one that gives you a straightforward, 2 month revenue prediction for your Stripe account. Metadater is another that automatically keeps your customer metadata (like mailing addresses and phone numbers for SMS reminders) up to date. It prompts your customers to add/update their Stripe metadata while they’re using your app.

And now that we’re bigger, I can put a big number up on the front page that says just how much revenue Stunning has saved for all of its customers. 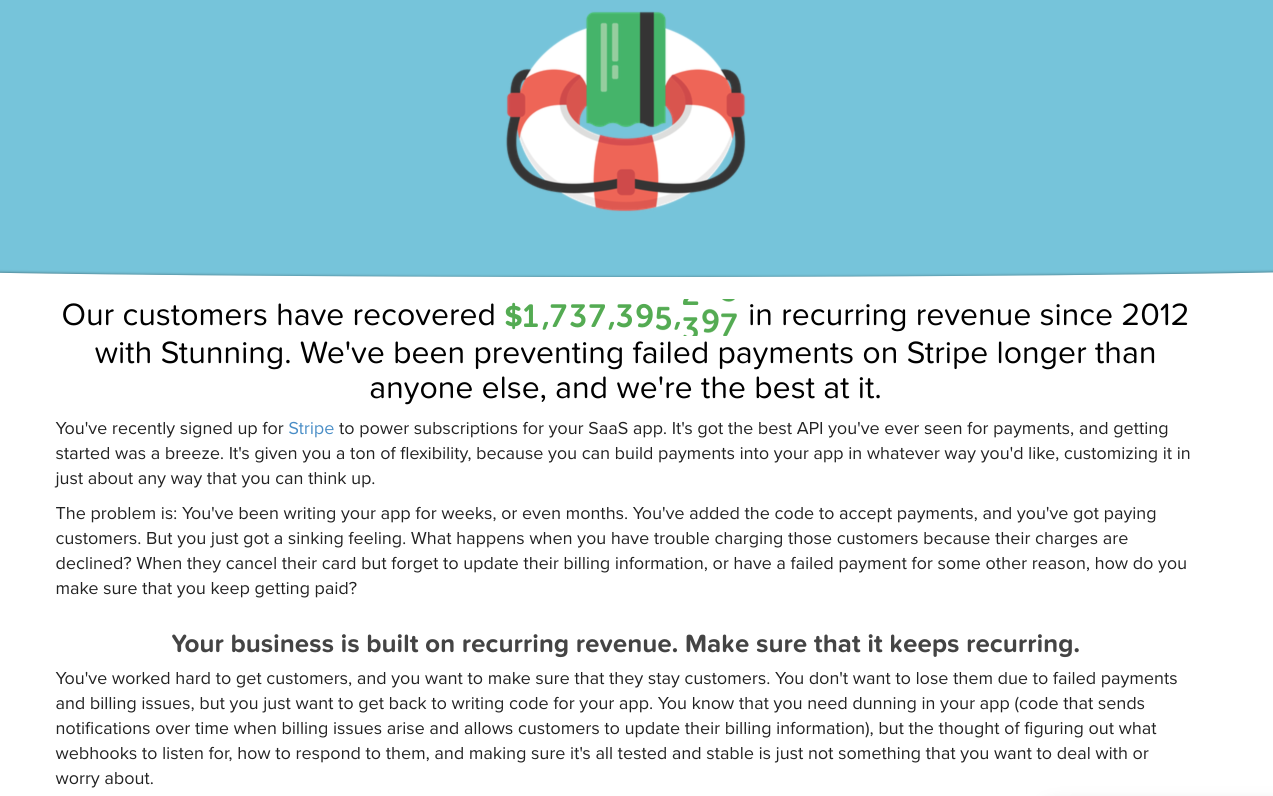 Putting this number on the homepage demonstrates that a lot of people trust Stunning, and that it actually works. When customers log in I show them exactly how much money Stunning has recovered for their business, right up top.

Alex:
Who would you recommend 30x500 to? Any kind of person or skill in particular?

Richard:
Definitely, especially for people who have been through the pain of launching a failed product at least once. I’ll bet that the class has you vigorously head-nodding the whole time because you’ve been there before.

Nothing out there is a magic bullet, and running an app will always have its own share of problems no matter how successful you are, but 30x500 will put you way ahead of the pack.

Ready to create your own products that sell?

Sign up to learn our step-by-step process for building products your customers need, want, and are ready to buy

Enroll in the 30x500 Academy today!
Find out how to get started along with our next batch of students