The Harsh Truth about "Fear" 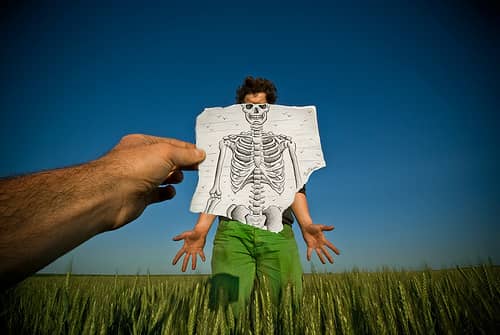 How many times a week do I hear a variation on this statement? I can’t even count. It’s in an email, a tweet, or a blog post. Or it’s a conversation at a conference, or over dinner.

It’s whispered with an air of wounded surprise, and revelation. Self-negation and armchair self-psychologizing ensues.

And then, from the other party in the conversation, come the warm fuzzies:

“You’re brave to write that.” “By simply admitting it, you’re already making progress.” “You can do it!”

There’s a person in pain, and they seek support, and they get support, yay!

Oh, sure, fear is a real enough thing. It’s a physiological response coupled with subjective interpretation of the symptoms. We all know what fear feels like:

Be honest, isn’t your experience more accurately described as a subtle… s l i d i n g away of attention?

There’s a cycle at work here, yes indeed, but it’s not a cycle of fear-avoidance-guilt.

It’s a cycle of avoidance-post-hoc-justification-absolution:

And you hope, against hope, that you find one that doesn’t whisper viciously to you in the dark: Because I’m incompetent, or Because I’m a failure, or worst of all, Because I don’t really want this at all, I just say I do so people will think I’m cool. So I can continue to think I’m cool.

And the answer that is closest to hand, that will put your failure to act beyond reproach, is…”Fear!”

The F-word fits like a glove, so you pull it on, and then you pretend this whole chain of causality happened the other way around.

Crying “Fear!” gets your your ego off the hook for your mysterious lack of action, for yourself. It sounds good to others. “Fear” is a plug that stops your leaky boat from sinking. But it doesn’t stop there.

“Fear” even delivers a net benefit, the icing on the exculpatory cake:

When you say those three magic little words (“But I’m afraid”), you’re able to turn the conversation from the concrete, the factual, from action, from motion, from responsibility, all things which can be measured or proven to be correct or incorrect (and which could finger you for failing) — to a conversation about feelings, which popular sentiment says cannot be wrong.

And “Fear” is the most sympathetic feeling of all.

All you have to do is let the phrase “But I’m afraid” pass your lips (or your Apple Bluetooth Keyboard). Maybe follow it up with a soupçon of public self-flagellation. You’ll have well-meaning friends rushing to assure you:

And as much as your ego hates the idea that you’re a failure (or lying to yourself about what you want)…it loves to be told that you’re flawless and awesome. Ego basks in attention the way a cat luxuriates in a patch of sunshine.

So you can use the fear-excuse to deflect, to hide, to absolve, to do nothing, and stay exactly how & where you are…and also to reap the rewards of success: the emotional pay-off of attention, respect, and support.

All without having to exert the effort of actually doing the work.

Press button, get validation. It’s no more sophisticated than an emotional Skinner box. Or World of Warcraft.

That’s how you can tell it’s an act.

The punishments and perquisites lay it out in burning letters 100 ft tall:

Fear isn’t a cause, it’s a symptom. It’s not a roadblock…it’s a scapegoat.

Hit a little close to home?

Well, you’re not alone. And while the truth may be harsh, I’m not. My goal isn’t to make you feel bad, it’s to make you think. To make you able to act.

Unfortunately you have to feel bad before you can act, because the truth hurts.

If you want to make something of your skills, yourself, your life…the worst truth is better than the best lie. Reality is your friend. Your ego, on the other hand, is your worst enemy. When you fail to give your ego what it wants, it throws a tantrum and makes you hurt. That’s the only way the ego knows to communicate: caresses…and punches.

But…if you take action now to rein in your ego, stop lying to yourself and others about your lack of action, banish the F-word from your lexicon, I promise you, the sting of ego’s punches will fade – and the allure of its caresses, likewise – and you will be so much stronger for it.

Easier said than done. Of course. Most of us spend our whole lives dancing in a dusty western to preserve our ego’s delicate constitution. The moment our ego says “Jump!” we ask “Off which cliff?” It takes just the thinnest slice of a second of the ego’s assaults to set us scrambling for a way — any way — to relieve its relentless pressure.

The secret, of course, is that your ego isn’t a separate entity you need to be “unleashed” from, or one that you can “conquer.” Your ego is you. It’s your “inner child”, and you’ve spoiled it rotten. You – yes, you – are the only one to blame.

Luckily that means you – yes, you – are the only one with the power to make things turn out differently, this time.

So. You want to achieve something?

You want to start a business, launch your product, write that sales letter…?

When you find yourself s l i d i n g away from the action that will result in the achievement you truly desire…stop.

That’s it: Stop. Don’t slide away. Don’t look for an excuse. For the love of all that is potent and truthful, steer clear of self-analysis. Do not create the Bystander Effect with your own future. Keep it to yourself.

Resist the mortal urge to press the button that dispenses the reward-pellet of group absolution and ego strokes. Don’t press it. Don’t even look at it.

Then you’ll finally be ready to get shit done.