Declaring Your Independence… a History

Today — July 4th — is the perfect day to talk about revolution.

Today I want to have a chat with you about your independence.

But first, a history lesson.

If you’re American, you can probably recite the the story with me:

“On July 4th, 1776, Congress signed the Declaration of Independence at (where else) Independence Hall, and in so doing, kicked off the revolutionary war.”

Guess what? None of that is true.

It wasn’t signed in Independence Hall.

And it wasn’t the signing that kicked off the revolution, but meetings. 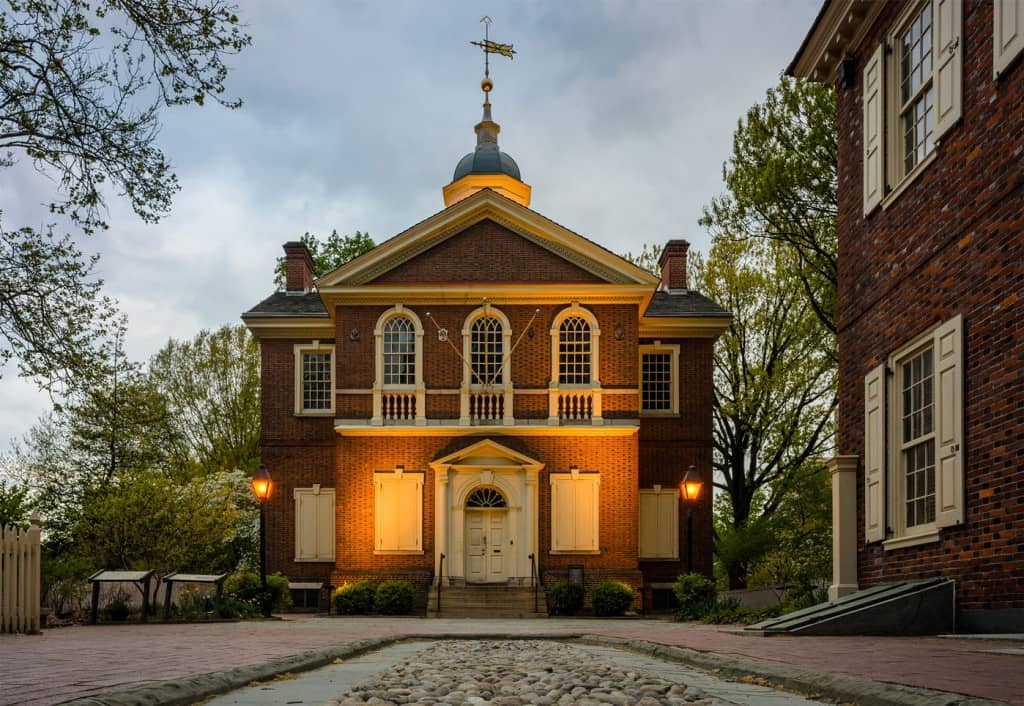 This pretty little building is Carpenter’s Hall, the most under-rated historic site in Philadelphia (and perhaps the entire United States).

It sits in a leafy park a block west of Independence Hall.

And there’s never, ever a line to get in.

Today, carpenters are framers or cabinet-makers. In the 18th century, carpenters were architects. They knew how to design structures that would last and how to get them built. They were, to a man, independent craftsmen. For power and control, they formed a guild.

Carpenter’s Hall is where they met.

It’s old, and it’s beautiful. But this part of Philadelphia is lousy with beautiful buildings older than this one.

What is it, exactly, that makes this one so special?

In the autumn of 1774, 56 delegates from the 13 colonies gathered together… and set a course for sedition.

And they did it right here, in the modest foyer of Carpenter’s Hall. 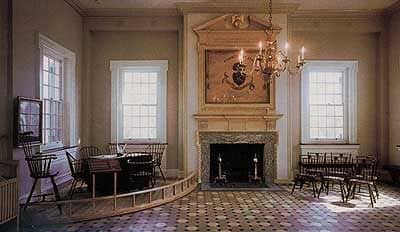 This was post-Boston Tea Party, and post-royal revenge acts.

But was the First Continental Congress prepared to quit the Empire? No.

The delegates did not vote “Yes” on revolution.

They came to a much more conservative plan: Try to fix the relationship. Until the revenge acts were repealed, they would boycott British goods. They spent 6 weeks debating, writing, editing. They finally voted to send a flattering and scraping Petition to the King to ‘implore his clemency.’

The King was not inclined to give it.

In April, the British Army attempted to seize colony munitions and weapons.

Have you noticed I haven’t mentioned the Declaration in quite a few paragraphs?

That’s because it wasn’t until over a year after the battle began that the colonial delegates voted to declare independence (and not on the 4th):

“The Second Day of July 1776, will be the most memorable Epocha, in the History of America.” — John Adams

Talk about shutting the gate after the horse escaped, amirite?

PS: the document itself wasn’t fully signed and executed until August. August!

Also? Just in case you’re not yet sufficiently disillusioned… Betsy Ross didn’t sew the first flag, and the Liberty Bell cracked due to nothing more than a manufacturing defect. Twice!

That’s the thing about stories: They’re a crock of shit.

The thing about stories is this: No matter how scrupulous the teller, a story cannot be true.

Stories are selected and edited — there’s no way for a human being to report every detail, even if there was a way to know every detail, which there isn’t.

Stories always rely on a clear case of cause and effect (even the more accurate one I told you today). Real life isn’t so cut and dry.

A story is a foregone conclusion.

Real life is a question mark.

The story says: Our brave forefathers met boldly in the fanciest building in town, with a unanimous cry of “Fuck this shit! I’m out!”

Including my life, and your life.

If you’re still here, slogging through my little polemic, you’re here because you crave freedom. You want to be free to work when you want, where you want, on what you want, with whom you want.

So now, I’m going to get straight to the point:

Stories will steer you wrong.

And you won’t even know it.

You’ve heard a million stories about how personal freedom happens.

You’ve absorbed their lessons. You know how these things work. You look for the signs they taught you, to check if you’re ready, if you’ve got what it takes, to do what the stories tell you you’ve got to do to succeed. To break away.

You probably don’t even realize you’re doing it.

The repetition of stories taught you instincts. You “know” things you’ve never personally witnessed or experienced. But you feel sure.

Because the stories set up shop in your unconscious.

Stories which are, at best, painfully incomplete. And, at worst, outright lies.

Like the sexy Public Relations storyline about July 4th:

Stories paint a picture where every detail is heavy with meaning. Sure, claiming the British state house for your Declaration makes a great “fuck you” story. But in reality, a lot of the most important work happened in less dramatic venues: guild halls, taverns, on horseback, in other states.

Stories claim freedom is declared in one, shining, dramatic moment. But the colonists only took each incremental step after long debate. It took years.

Stories claim you must be decisive and 100% certain before you act. But in reality, the colonists didn’t declare freedom until a year after war began. And even then, not everyone agreed to sign.

Stories claim they did it all themselves. But, naturally, this wasn’t the case. It was the French who helped the colonists tie a final ribbon around the war for independence.

Stories claim that freedom cannot be granted, only taken. This last one is true.

If you want your freedom, you can’t sit around and wait for somebody to offer it you. You’ve got to create it.

This is how you declare your independence

You do it in stages.

You deliberately and slowly build advantages.

You create small wins, and stack them together to create bigger wins.

You implement an escape plan: charge your clients a little more, so you can work a little less, to free up time to build more. Or you negotiate a shortened work week.

You invest in yourself.

You don’t guess (or wait for someone to tell you what to do), you do your research.

You create a tiny product first.

You waver — debate with yourself — but you stay the course, anyway, and reap the rewards.

You keep going even when you don’t “feel” motivated.

You know that there will be hiccups — don’t call them failures — and you resolve, in advance, that you won’t let them foil your plans.

You don’t wait to “feel” ready (because you know that’s a myth, a product of story).

You don’t have to go it alone.

My free Year of Hustle roadmap will help.

And the next time you’re in Philly, skip the lines for Independence Hall and make a beeline to Carpenter’s Hall. I promise you it’ll be worth it.