Anatomy of a Launch

Yo peeps, this is my as-it-happens (you might say “live”) journal of building a new launch for my book, Just Fucking Ship, while working on the second half of 30x500.

Background: JFS never had a proper launch, but I built anticipation when it was brand new by live blogging its creation (see also: here, here, here, here). People love that kind of thing. It’s a show, something they can be a part of, and educational, too.

Even tho there was no explicitly designed launch, I did make several announcements. I sold roughly 1500 copies so far, for roughly $21,000 in sales. (And have got lots of happy emails from readers who have been shipping awesome stuff left, right, and center!)

Most of that was early days, of course. Natural momentum. Plus one interview.

Now that JFS is done, though, it’s just begging for a real launch. There’s way more money in there. And since it’s supposed to be a cornerstone of our product funnel, there’s even more money on the backend. (If I can sell a potential customer on a $19 book, and they get a taste of how well my advice works, they are gonna be far more likely to take my $1299+ class. Which I, naturally, build with JFS principles, because that’s how I achieve everything.)

I’m gonna share my daily tasks and stuff with you in a hot second, but first I want to answer the question:

I want to create an influx of new sales of JFS on a specific schedule, yes. But it’s more than that.

This is what I’m creating with the new JFS launch:

So a timed launch (now) and an evergreen launch (for the future). While using the leftovers from my creative process (working on 30x500) as illustrations.

Now, without further ado, what am I doing, and how?

Early I brainstorm some general ideas of what objections people have to shipping their own projects (as well as buying the book in general). And the mistakes people make, and the inspiring things they need to hear.

Wrote down a bunch of topics in Trello.

Ordered topics in Trello. Thought about the anticipation curve & logical flow to ratchet up desire/tension.

Came up with the “Ship by September” idea.

Wrote a blog post to introduce Ship by September.

Hopped on VectorStock and grabbed the stock art calendars, whipped up the graphic.

Set up an Infusionsoft campaign, form, and tags.

Wrote a “thank you” page and hooked up the Infusionsoft form to it.

Set a timer for the next email so I had time to write it & people didn’t drop out of the campaign.

Asked my husband & biz partner, Thomas, to style the signup form while I put the final touches on.

Tweaked the blog post into an email to promote SBS to our existing subscribers (12,000+ members!).

Tried to tweak the email campaign so my existing subscribers could join by simply clicking a link. Hit some technical roadblocks… waited a lot on line with phone support, cuz when isn’t that cool?

Wrote the second email that goes out the next day (thanks to the queue).

Tracked my time with Noko (cuz understanding my ROI is sexy): 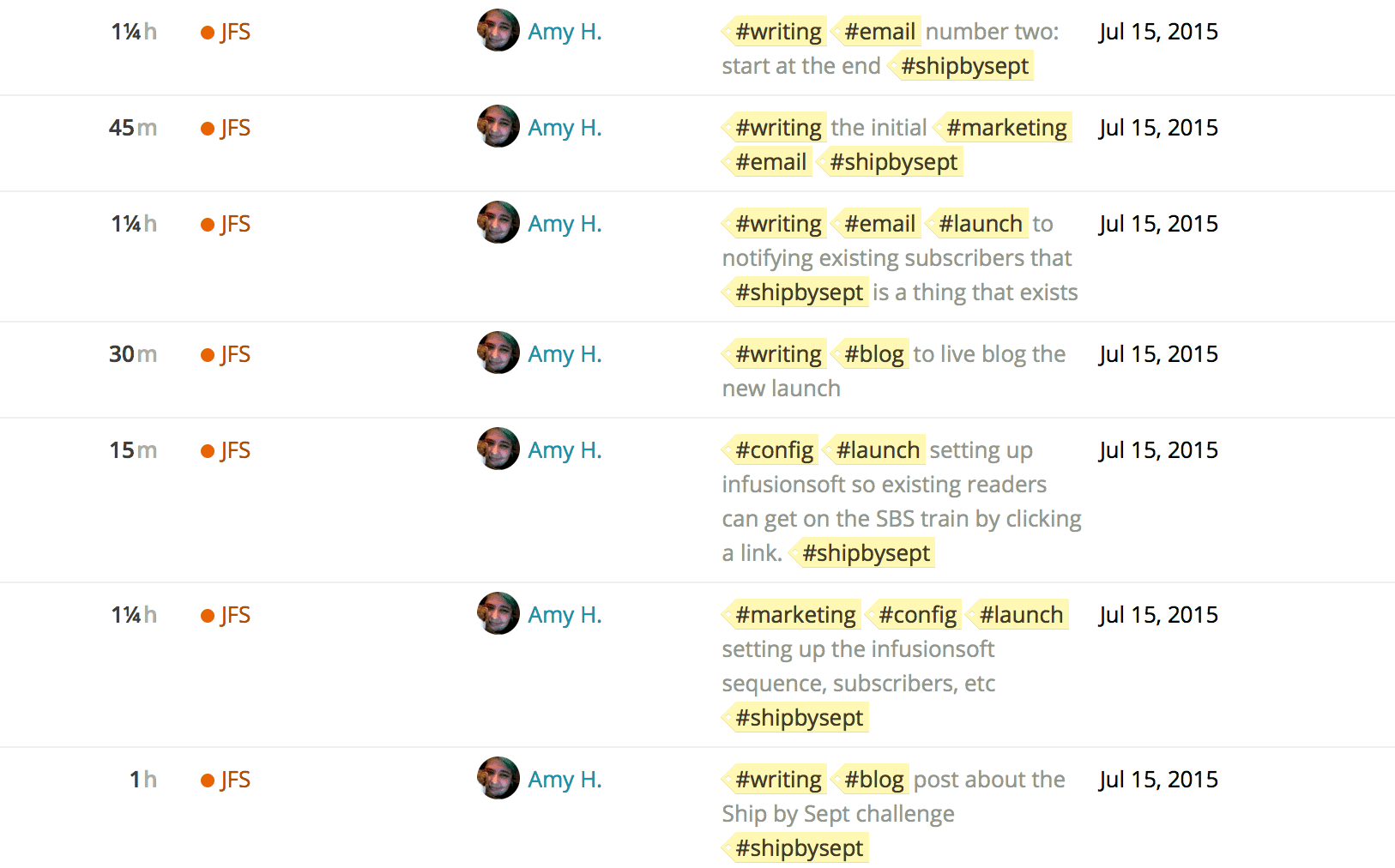 And here we are!

2nd email went out today at 8 am local time, thanks automatic!

Checked my sales #s over coffee:

Even tho I haven’t actually pushed the book in any way yet, sales are UP! Nothing super dramatic, but from an average of 1-2 books a day to 8 yesterday and 5 so far (by 10am!).

A couple of my students and one list subscriber I don’t know told me explicitly: The automagical link that lets them subscribe to the SBS campaign? Confused them. Gotta come up with a way to fix that.

Came up with a clever way to onboard people who join after the emails send, by creating an additional sequence with an update email that I can update each time a new lessons ships, and then hot swapping the existing form to it. Infusionsoft makes me furious but it’s also ridiculously powerful.

Bungled the Infusionsoft setup. Thought the next email would be going out the NEXT day (in my fatigue) when it was supposed to go out July 17 at 8:00am. Which meant people passed thru the date timer on the campaign, and out the other side. I had to figure out how to fix it, AND THEN re-add them. Which I did. Ugh. Hate/love. Love/hate. Hate/hate.

Set up a Lessons page to show the lessons on my blog so I can link to it.

Wrote the damn email that should have been done. I was pretty tired… so it kept growing bigger and bigger. Cut cut cut.

Fixed Infusionsoft, got everybody the email by the early evening. Yay/yuck.

Reading my source material for lesson 3. Writing up lesson 3. Getting pissed at how I wrote it so cutting it/rewriting it. Rinse and repeat a few times. I have a lot of excess material now tho.

Finally formalized the launch outline that was in my brain. Set it up in Trello. Prepared to take screenshots to document the whole process for a blog post / book addition.

Had a chat with my good friend, and former student, Brennan about maybe doing a launch to his list. Worked out the timing, payment details, and what tech stuff I’d have to set up. Started to work on that (mostly the Wordpress stuff). Not done with it yet.

Brainstormed some further incentives to convince people to “shit or get off the pot” as the event goes on. Buy, or don’t buy, either is fine with me, but if you really wanna buy but put it off cuz I failed to give you an adequate reason to act, that is lame and I don’t wanna cause that scenario. So… I’m gonna add some crackin’ good new material to the book (drawn, actually, from the emails I’m writing, and the work I’m doing to make this launch, and also emails from readers). And raise the price slightly, after Brennan’s and my joint webinar for his list.

It’s been crazy. I’ve been tracking my time though so it’s easy to backfill this journal.

Today I updated the blog posts mostly and spent time on other projects. Tomorrow I’ll get back into setting up the Brennan-launch stuff and the next lesson.

But before I forget, look! It’s working:

It’s pretty clear where I started sending out Ship by September emails to peeps. Now there’s been no hard pitch or anything, just mentions at the end of every email. Still sending out stuff that is innately good.

So far, 1550 peeps in the sequence… and more people do join every day! So it’s well worth keeping the “lessons so far” email up to date (which I do every time I drop a lesson).

I did some Infusionsoft voodoo that only seems to work half the time, and it looks like 2/3 of the people in the Ship by September challenge have not yet purchased the book. So ~1000 potential buyers. I think I can get a 15% conversion rate by the end. We shall see!

So… btw, total revenue since I started this thing is $817.

The same days of the week, but last week before I started, was… $95. 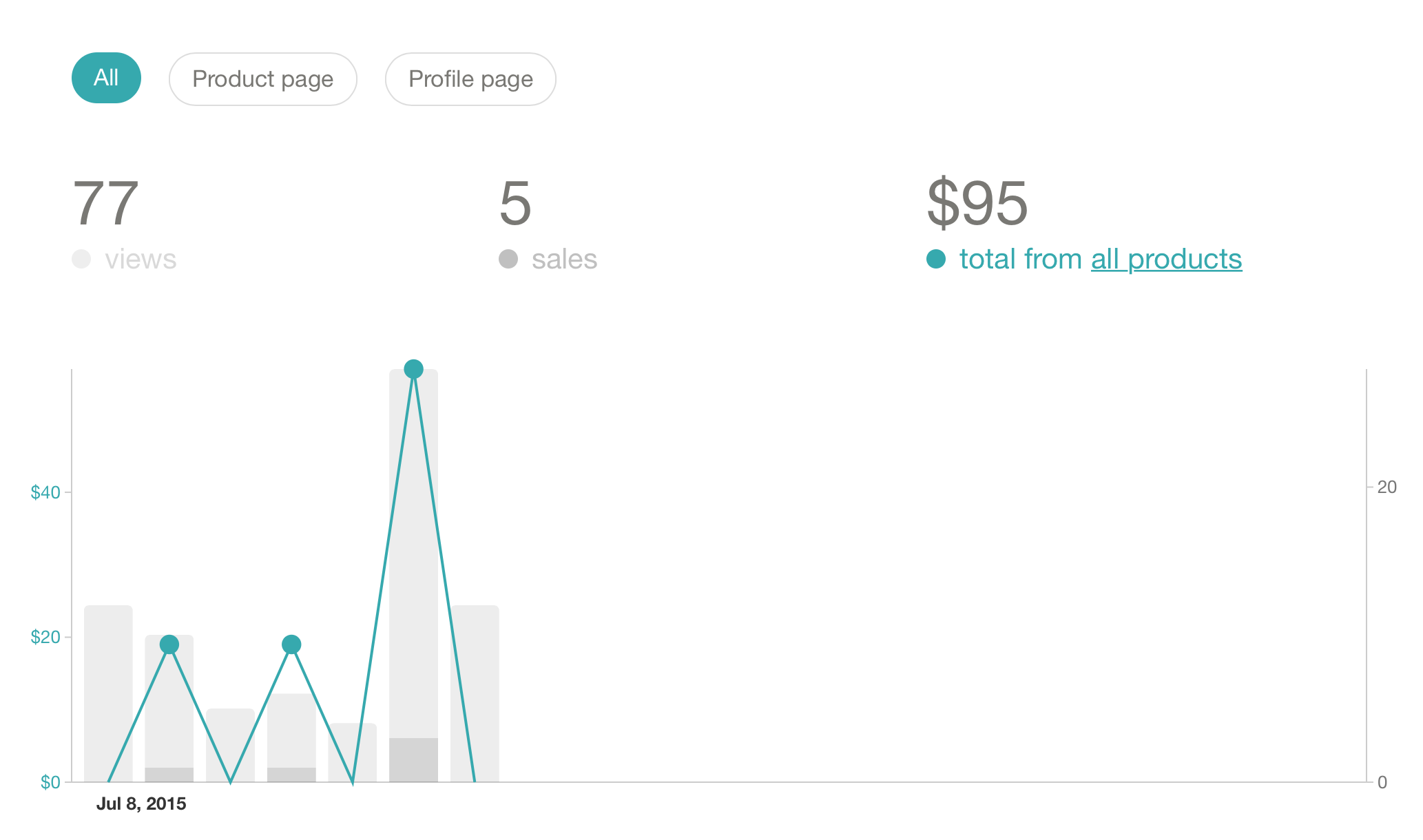 So nearly a 9x increase in sales. Granted, I have logged a total of 16.5 hours on this launch so far. That’s not quite $50 an hour at this stage, a truly shit hourly rate by my standards. HOWEVER, that includes groundwork for launching to Brennan’s list, potential other partnerships, and of course, an email sequence I can reuse, and reuse, and reuse, to create a rolling evergreen launch. I’m writing it for Ship by September, but it will become the email course you see when you hit my site as the main CTA. Which will just get so many people into our funnel.

Tis the future. My hours now will become more & more valuable as time goes on. That’s the magic of product. Glee!