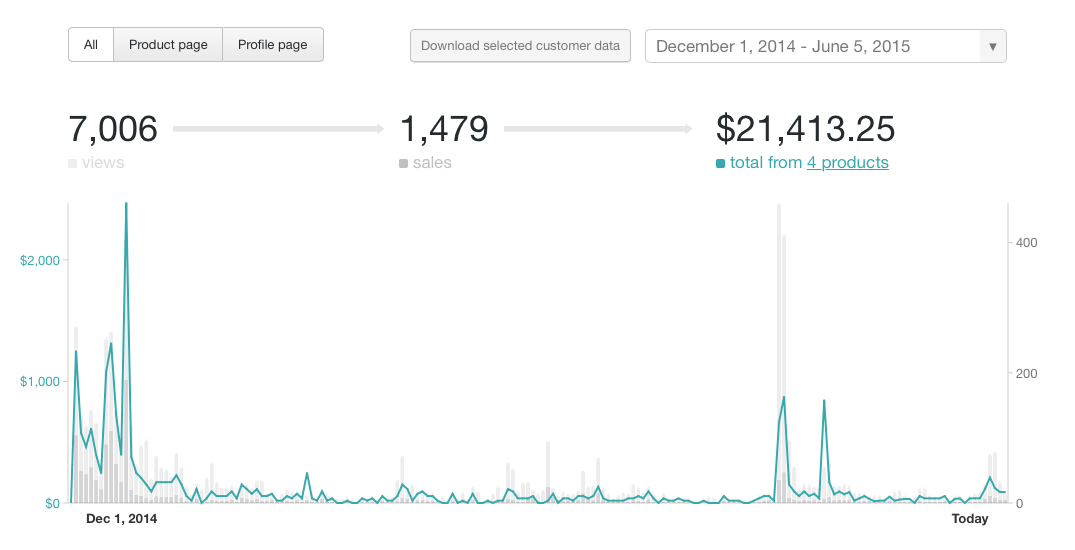 On December 2nd, I sat down, created an outline, and started writing.

After a couple more weeks of work, I shipped the final(ish) version. Then it was Christmas — New Year’s — time to get our new office renovation off the ground — time to launch & build the brand new 30x500.

I put JFS on a shelf and left it alone for a while.

Now, 6 months later, the insanity is letting up — just a bit! — so we can get back to work and give JFS the things it deserves.

Oh yeah, and an actual, you know, launch. All I’ve done so far was simply announce that the book existed.

But before we bust our butts on all that stuff…I thought, why not look back?

So here you go: a retrospective. Six months in the life of a 24-hour book.

This post is super long (2,000 words) but if you have any interest in the way a veteran bootstrapper like me creates, soft launches, and evolves a product? You’re gonna get so much value out of it. It’s worth your time.

Now, the important thing to remember is this book grew over time. This is not something you can do with a published book — or even, really, a book you self-publish on the Kindle platform. When you control the whole chain from production to distribution, you can launch a beta and then send updates.

Which is great because…

It was rough and unedited. It was missing more than about a third of the chapters. I included placeholders for those chapters, though, in the places where they belonged. 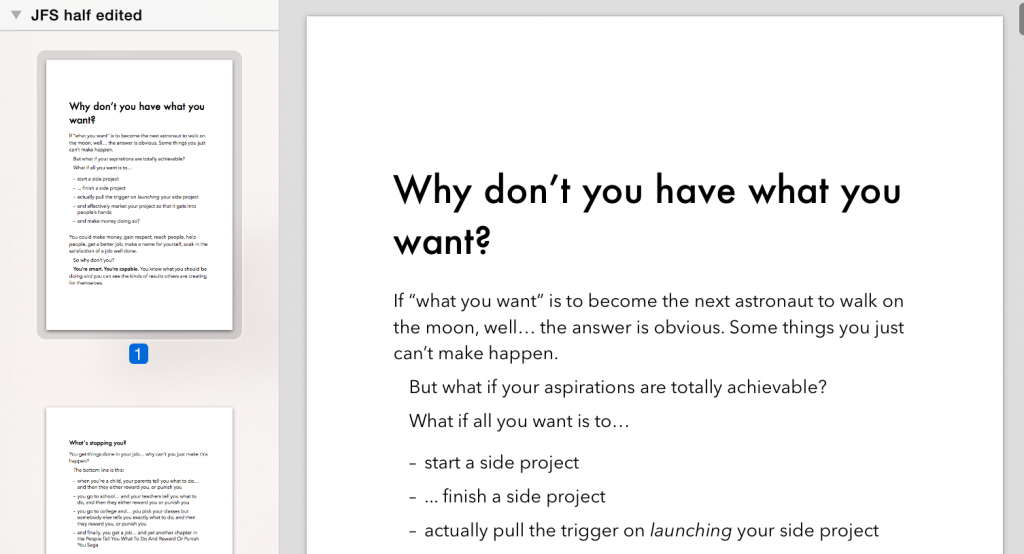 I knew what was missing because the very first thing I did with my 24 hours was spend two hours working on my backwards plan. (Which is a technique you learn in JFS!)

I used that plan to create the outline, break it into small, doable chunks, set up my workflow, track progress, and get down to biz so I could meet my challenge deadline. (Each one of these steps is a chapter in JFS.)

At the end of my 24-hour period, I picked a good-enough Ulysses stylesheet, used the automatic export to PDF, Alex uploaded it to Gumroad, and I announced it on the blog.

Yep, the PDF was pretty fug. There was no cover. There were awkward line breaks in weird places. And the world didn’t end!

Fact: If you can help your customer kill a serious pain, they won’t care if the supporting details aren’t perfect.

Want more detail on how I used those 24 hours? Well, read the live blog to find out.

A few days later, I shipped a chapter-complete update. 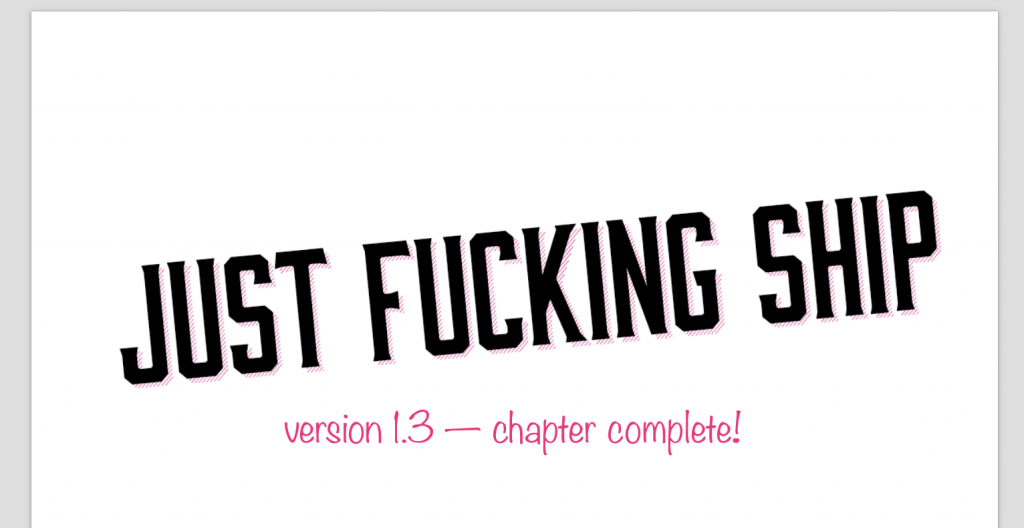 I fleshed out all the empty or incomplete chapters, added a couple (couldn’t help myself), proof-read and edited the whole shebang, spent a few hours tweaking the style and layout (aka customized the Ulysses theme) and designed a cover. I live blogged this too.

Alex wired up a post-sale feedback sequence to help our readers use the book and also to encourage them to tell us how they were using it. (And we’ve gotten hundreds of emails in reply… woohoo!)

And… that’s pretty much the last thing I/we did to/for/with the book. Til now.

This is where we really fell down. Life got in the way — my office renovation, house drama (so many leaks), and last but not least, Alex and I have been busting our asses to create the brand spanky new 30x500.

But hey, that’s why I’m here, now, reviewing what we’ve got, and writing about it, so we can move forward.

Here’s all of the blogging I did about the book:

Writing and just fucking shipping a book in 24 hours was an awesome experience. A++ would do again. And it’s even better to hear from our readers, who have used JFS to JFS all kinds of awesome stuff of their own. Yay intrinsic motivation!

But I ain’t gonna lie…making 5 figures off it? That’s pretty rewarding, too.

Stats from 6 months of sales:

Now, $26k is not shabby, not shabby at all! But it’s not great, either; that’s not a huge launch for me or Alex, much less me and Alex. It’s not even the best launch I’ve done for an ebook. Probably because I did dick all to actually, you know, launch it.

For a couple weeks of solid work, with an ongoing weekly sales average of $200-350? I’m not cryin’ about it.

But I know we can do better.

JFS is so critical, which is why it’s ok it’s not perfect yet

Paradoxically, the reason I’m not stressing out about our piss poor marketing efforts so far is… well… JFS is super mission critical to our long-term business strategy. I know, I know, that sounds backwards, but hear me out:

JFS isn’t just its own delicious little book… it’s going to be the entry point to our 30×500 universe.

Kathy Sierra writes, “Don’t build a better product, build a better customer.” And that’s something Alex and I have spent our whole careers doing. That’s what JFS does.

First, it’s priced for an impulse buy; $19 is a couple of movie tickets, max.

Second, it’s a low risk way for new readers to figure out if they like our advice & our teaching style. (Until JFS, you had two options: Read this blog for free, or plunk down $2000 for our class. That’s quite a leap.)

Third, it’s a way for us to help potential 30×500 students achieve something, see results, to prepare them to get the most out of class. And it may even help some of them earn the money to pay for the class.

Fourth, it’s a way for us to help our existing 30×500 students achieve more.

Fifth, it’s something we can get into the Kindle marketplace, and Audible, and bundle with other people’s products to expand our reach.

When something is a one-shot, you really have to get it right the first time because that’s the only chance you’ll get. JFS, on the other hand, is timeless, and ongoing. So it doesn’t really matter that we didn’t launch it properly… at first.

Our next 30×500 launch will be this fall. For the first time ever, we won’t have to restrict the number of seats. We’ll be ready to scale. And JFS will be there to help our students… and us.

And then we’ll expand the book.

And then we’ll revise all that marketing stuff again.

And maybe then we’ll add videos or do some webinars.

And word will spread.

And our readers will continue to ship awesome things and feel the joy of putting their work out into the world, under their own steam.

And yays will be had by all.

Oh, and I’ll be blogging and writing about it, so you’ll want to sign up for our newsletter (below!).

And the new layout, epub & mobi, etc., goodies will be free upgrades if you buy JFS today. So you might want to grab your copy for just $19.